Physicists prove the existence of a supersolid state of matte 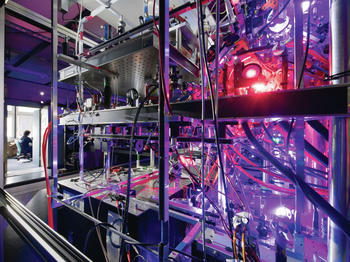 This image shows parts of the experimental laser setup used by the researchers in Stuttgart to create a supersolid from ultracold dysprosium atoms.

A supersolid is a state of matter that can be described in simplified terms as being solid and liquid at the same time. In recent years, extensive efforts have been devoted to the detection of this exotic quantum matter. A research team led by Tilman Pfau and Tim Langen at the 5th Institute of Physics of the University of Stuttgart has succeeded in proving experimentally that the long-sought supersolid state of matter exists.

In our everyday lives, we are familiar with matter existing in three different states: solid, liquid, or gas. However, if matter is cooled down to extremely low temperatures, quantum effects can also enable other states of matter. This includes superfluids, which are characterized by a frictionless flow of atoms.
Moreover, in the quantum world, particles can exist in superpositions of being unpredictably and randomly in two different locations.

It had long been conjectured that even superpositions of states of matter are possible. According to these ideas, known states of matter, such as solid or fluid, can thus be superimposed to form new states of matter with new properties. A supersolid is exactly such a superposition state, and features both the crystalline structure of a solid and the frictionless flow of a superfluid. In such a state every atom is unpredictably and randomly either part of the solid or of the superfluid.

In the experiments in Stuttgart, the supersolid is generated from dysprosium atoms that behave like tiny magnets. These atoms are cooled down to near absolute zero (-273° Celsius). At this point, two types of interaction between atoms become important: if two atoms come very close together, they collide like billiard balls. At the same time, they can attract or repel each other over larger distances due to the magnetic interaction. To generate a supersolid, the researchers adjusted the relationship between these two forces such that a crystalline lattice structure and superfluidity are created simultaneously. "We were able to observe the periodicity of the crystal directly with a microscope, and tested the quantum mechanical superposition through interference experiments" explain Mingyang Guo and Fabian Böttcher, postdoc and doctoral student at the experiment.

Detection by means of sound waves

In recent years, several observations of a supersolid have been reported, but it later turned out that only one form of sound wave was present. "Using our experiment with ultracold dysprosium atoms, we have now succeeded for the first time in observing simultaneously all defining properties of a supersolid state" Tilman Pfau summarizes. The experiments in Stuttgart now open up the possibility to study the exotic properties of this new state of matter in unprecedented detail.