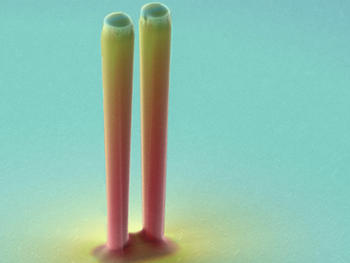 Strain field of two nanopillar resonators for the mechanical coupling of nanopillars.

They look like toothpicks, but much, much smaller: 10,000 times shorter and 1,000 times thinner. The research team around physicist Professor Eva Weig succeeded in constructing nanopillars so closely together that they can be coupled via the strain field and succinctly oscillate together. This technique makes it possible to envisage whole fields of such resonators, which in turn can be used as sensors or impulse generators with application options in quantum technology. The experiments are described in the open access journal Nature Communications.

Coupling between nanomechanical resonators currently is a popular research field, as they oscillate better collectively than solo in certain respects. In contrast to set-ups that require induced fields to achieve a coupling effect, the nanopillar resonators of the Nanomechanics group from Konstanz produce a direct, mechancial coupling. The key here is that the pillars have to be anchored closely enough to each other. If one nanopillar is set in motion, the surrounding ground distorts. This distortion has a certain range and consequently the neighbouring pillar “senses” this and also oscillates. “The coupling is very strong if the pillars are close enough”, says Eva Weig.

“Our system has the advantage that it will be easy to establish large fields with many pillars”, says doctoral researcher and co-author Juliane Doster. As the pillars’ oscillation amplitudes are so large that they can even be seen under a microscope, it is possible to directly observe what happens in such a field of pillars. The Nanomechanics group used the semiconductor gallium arsenide for their nanopillars, but actually all semiconductors would be suitable. “You simply need to know how to etch the pillars from the material”, says Juliane Doster.

Additional functions could also be included in the resonator fields. “Even though our pillars have not been functionalized yet, our results might lead the path to realizing whole networks of such functionalized nanopillars in the future”, says Eva Weig. Several single-photon sources may be synchronized this way, for example, for applications in quantum information processing. Another possible application would not even require functionalization: Coupled pillar fields might be used to transport acoustic signals without loss in some kind of “one-way street for sound waves”.