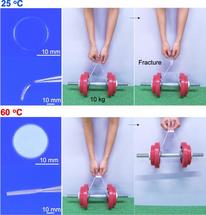 The gel is soft and transparent at 25°C and cannot support a 10 kg weight (top panels) but it quickly becomes rigid and opaque when heated to 60°C, becoming strong enough to support the weight (bottom panels). (Nonoyama T. et al., Advanced Materials, November 18, 2019).

A new material that stiffens 1,800-fold when exposed to heat could protect motorcyclists and racecar drivers during accidents.

Hokkaido University researchers have developed a hydrogel that does the opposite of what polymer-based materials, like plastic bottles, normally do: their material hardens when heated and softens when cooled. Their findings, published in the journal Advanced Materials, could lead to the fabrication of protective clothing items for traffic and sports-related accidents.

Takayuki Nonoyama and Jian Ping Gong of Hokkaido University and their colleagues were inspired by how proteins remain stable inside organisms that survive within extreme-heat environments, like hot springs and deep sea thermal vents. Normally, heat "denatures" proteins, altering their structure and breaking their bonds. But the proteins within thermophiles remain stable with heat thanks to enhanced electrostatic interactions such as ionic bonds.

The team developed an inexpensive, non-toxic polyacrylic gel based on this concept. A gel composed of polyelectrolyte poly (acrylic acid) (PAAc) was immersed in a calcium acetate aqueous solution. PAAc on its own acts like any other polymer-based material and softens when heated. But when calcium acetate is added, PAAc's side residues interact with the calcium acetate molecules, in a way similar to what happens inside thermophile proteins, causing PAAc to act very differently.

The team found that their originally uniform gel separates into a polymer dense "phase" and a polymer sparse one as the temperature rises. When it reaches to a critical temperature, in this case around 60°C, the dense phase undergoes significant dehydration which strengthens ionic bonds and hydrophobic interactions between polymer molecules. This causes the material to rapidly transform from a soft, transparent hydrogel to a rigid, opaque plastic.

The heated material was 1,800 times stiffer, 80 times stronger, and 20 times tougher than the original hydrogel. The soft-to-rigid switching was completely reversible by alternatively heating and cooling the material. Moreover, the scientists could fine-tune the switching temperature by adjusting the concentration of the ingredients.

They then demonstrated a possible application of the material by combining it with a woven glass fabric. This new fabric was soft at room temperature, but when it was pulled against an asphalt surface for five seconds at a speed of 80 km/hour, the heat generated by the friction hardened the material with only minor abrasions forming on the contact surface.

Takayuki Nonoyama says "Clothing made from similar fabric could be used to protect people during traffic or sports-related accidents, for example. Our material could also be used as a heat-absorbent window coating to keep indoor environments cooler."

"This polymer gel can be easily made from versatile, inexpensive and non-toxic raw materials that are commonly found in daily life. Specifically, the polyacrylic acids are used in disposable diapers and calcium acetates are used in food additives," Jian Ping Gong added. "Our study contributes to basic research on new temperature-responsive polymers, and to applied research on temperature-responsive smart materials."