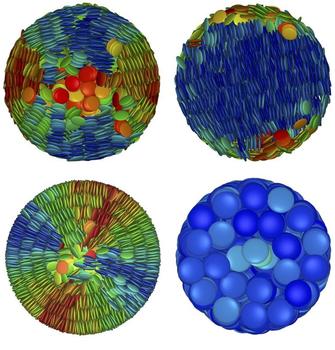 Simulation of the different orders of the liquid crystal, matching the measurements.

A team of researchers has used X-rays from DESY's research light source PETRA III to explore the amazingly diverse self-organisation of liquid crystals in nanometre-sized pores. The study, led by Patrick Huber from the Hamburg University of Technology (TUHH), shows how liquid crystals arrange themselves in pores of different sizes, exhibiting different electrical and optical properties. These could be of interest for applications such as sensors and novel optical metamaterials, as the group around first author Kathrin Sentker from TUHH reports in the journal Nanoscale. The research will be continued within the framework of the planned Centre for Multiscale Materials Systems (CIMMS), in which TUHH, University of Hamburg, Helmholtz-Zentrum Geesthacht and DESY are involved and for which the Hamburg Science Authority has just approved approximately four million euros funding.

The researchers had studied a special liquid crystal material called HAT6 (2,3,6,7,10,11-hexakis(hexyloxy)triphenylene; C54H84O6), whose single molecules are disc-shaped. Below about 70 degrees Celsius, they arrange themselves into a liquid crystal; by heating to about 100 degrees, the order can be broken. The scientists filled this material into pores in an aluminium oxide substrate and cooled it down. The cylindrical pores were 17 to 160 nanometres (millionths of a millimeter) in diameter, 0.1 millimetres long and situated on a regular, hexagonal lattice.

At DESY's PETRA III, at the European Synchrotron Radiation Facility ESRF in Grenoble (France) and at the National Synchrotron Light Source (NSLS II) on Long Island (USA), the team observed how the liquid crystal material behaves in the nanopores. The geometry and chemical properties of the pores force the liquid crystal's disk molecules to arrange themselves in different ways. “The pore size and an optional coating of the pore wall control how the liquid crystals self-organise when they cool down,” reports co-author Milena Lippmann from DESY. “This can result in nanometer-sized rings or straight columns, for example.”

The slower the temperature drops, the better the respective order is formed. With a hydrophilic or hydrophobic (water-attracting or water-repelling) coating of the pore wall, it can be controlled whether the disc-shaped molecules attach themselves to the pore wall with the flat side or their edges. “The different collective orders of the liquid crystals have different electrical and optical properties,” explains Huber. For example, the axial arrangement of the molecules is electrically conductive, which is lost when the order is destroyed during heating. “This could be used to construct switchable, one-dimensional nanowires, for example”, adds co-author Andreas Schönhals from the Bundesanstalt für Materialforschung und -prüfung, who is interested in the dielectric properties of these systems.

The different orders also polarize light differently. “Since each pore is smaller than the wavelength of visible light, the ensemble of nanopores can control the polarization state of transmitted or reflected light, and this can further be modified by controlling the liquid crystal order at the level of individual pores – this opens up possibilities far beyond what is achievable with the ingredients, liquid crystal and aluminum oxide, alone," Huber emphasizes. “Such tailor-made and adaptive metamaterials are the basis for the rapidly developing transformative optics. Here, light paths can be realised in materials that are not possible with classical materials. Examples are extremely thin optical lenses with high refractive power, which could perhaps please any spectacle wearer in the future, or coatings that make objects invisible.”

From a materials science perspective, the study also shows how the gap between so-called bottom-up and top-down self-organisation can be bridged in order to design mechanically stable, macroscopic material systems. Bottom-up means that structures are formed from smaller units. Top-down means that smaller structures are created in large units.

In the present case, the pores were produced by an etching process in which regular nanocylinders form in a macroscopic substrate – a top-down self-organisation. These pores were filled with the liquid crystal material, in which the individual molecules form structures by bottom-up self-organisation. “The nanostructured aluminium oxide thus forms a mechanically robust framework for the rather soft and fragile liquid structures, resulting in a self-organised hybrid material that is mechanically stable and can also be used in macroscopic components,” emphasises lead author Sentker. “The lack of mechanical stability is still a major hurdle for the technological use of many other functional nanomaterials.”

This study was carried out within the framework of the Collaborative Research Centre SFB 986 Tailored Multiscale Material Systems M3, which is funded by the Deutsche Forschungsgemeinschaft (DFG). The study involved the Hamburg University of Technology, the Bundesanstalt für Materialforschung und -prüfung, the Max Planck Institute for Dynamics and Self-Organization, the Helmholtz-Zentrum Berlin, the Czestochowa University of Technology in Poland, the Interdisciplinary Centre for Mathematical Modelling at the University of Loughborough in Great Britain and DESY.

The studies are to be continued at the new Centre for Multiscale Materials Systems (CIMMS) on the research campus in Hamburg-Bahrenfeld. This centre, which has just been approved by the Hamburg Science Authority within the HamburgX funding line, aims to develop the fundamentals for the production of three-dimensional, multiscale, multifunctional and hybrid material systems based on nanoscale structures. “These material systems differ fundamentally from existing materials in that they are bioinspired by the hierarchical structures of natural biological materials, using this concept for technologically novel base materials and enabling a more sustainable materials management by reducing chemical diversity”, adds Gerold Schneider from TUHH, spokesperson of the new research network involving also the University of Hamburg, the Helmholtz Centre Geesthacht and DESY.