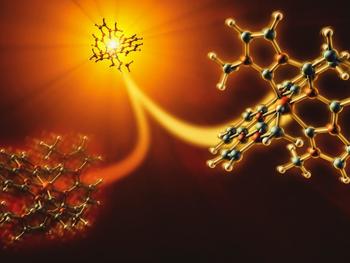 Experiments at SLAC showed that an inexpensive photosensitizer molecule, iron carbene, can respond in two competing ways when hit by light. Only one of those pathways (right) allows electrons to flow into devices or chemical reactions where they're needed. The molecules took this energy-producing path about 60% of the time.

Photosensitizers are molecules that absorb sunlight and pass that energy along to generate electricity or drive chemical reactions. They're generally based on rare, expensive metals; so the discovery that iron carbenes, with plain old iron at their cores, can do this, too, triggered a wave of research over the past few years. But while ever more efficient iron carbenes are being discovered, scientists need to understand exactly how these molecules work at an atomic level in order to engineer them for top performance.

Now researchers have used an X-ray laser at the Department of Energy's SLAC National Accelerator Laboratory to watch what happens when light hits an iron carbene. They discovered that it can respond in two competing ways, only one of which allows electrons to flow into the devices or reactions where they're needed. In this case, the molecule took the energy-producing path about 60% of the time.

In a solar cell, an iron carbene attaches to the semiconductor film on the surface of the cell with its iron atom sticking up. Sunlight hits the iron atom and liberates electrons, which flow into the carbene attachments. If they remain on those attachments long enough - 10 trillionths of a second or more - they can then move into the solar cell and boost its efficiency. In chemistry, the energy boost that photosensitizers provide helps drive chemical reactions, but requires even longer residence times for the electrons on the carbene attachments.

To pin down how this works, an international team led by researchers from the Stanford PULSE Institute at SLAC examined samples of iron carbene with X-ray laser pulses from the lab's Linac Coherent Light Source (LCLS). They simultaneously measured two separate signals that reveal how the molecule's atomic nuclei move and how its electrons travel in and out of the iron-carbene bonds.

The results showed that electrons were stored in the carbene attachments long enough to do useful work about 60% of the time; the rest of the time they returned to the iron atom too soon, accomplishing nothing.

PULSE's Kelly Gaffney said the long-term goal of this research is to get close to 100 percent of the electrons to stay on carbenes much longer, so the energy from light can be used to drive chemical reactions. To do that, scientists need to find design principles for tailoring iron carbene molecules to carry out particular jobs with maximum efficiency.