On the trail of organic solar cells’ efficiency 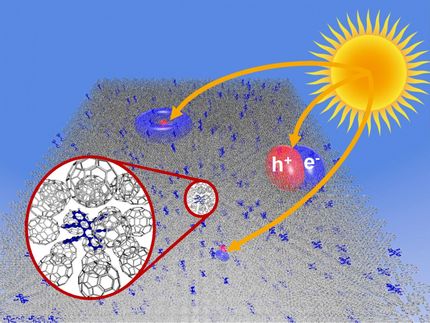 Illustration of the generation of charge pairs (excitons), the precursors of free charge carriers in the active layer of an organic solar cell.

Scientists at TU Dresden and Hasselt University in Belgium investigated the physical causes that limit the efficiency of novel solar cells based on organic molecular materials. Currently, the voltage of such cells is still too low - one reason for their still relatively low efficiencies.

In their study, by investigating the vibrations of the molecules in the thin films, the scientists were able to show that very fundamental quantum effects, so-called zero point vibrations, can make a significant contribution to voltage losses.

Solar cells are a crystallization point of high hopes for the necessary transformation of the global energy production. Organic photovoltaics (OPV), which is based on organic, i.e. carbon-based materials, could be ideally suited to become an important pillar in the energy mix of the "renewables" because they have a better ecological balance sheet compared to conventional silicon-based modules and only a small amount of material is required to produce the thin films. However, a further increase in efficiency is necessary. It is based on various characteristic values such as the open-circuit voltage, whose too low values are currently a main reason for still quite moderate efficiencies of OPV.

The study investigated physical reasons for this - including the vibrations of the molecules in the thin films. It was shown that the so-called zero point vibrations - an effect of quantum physics that characterizes the motion at absolute temperature zero - can have a significant influence on voltage losses. A direct relationship between molecular properties and macroscopic device properties was demonstrated. The results provide important information for the further development and improvement of novel organic materials.

The low energy edge of optical absorption spectra is crucial for the performance of solar cells, but in the case of organic solar cells with many influencing factors it is not yet well understood. In the present study, the microscopic origin of absorption bands in molecular blend systems and their role in organic solar cells was investigated. The focus was on the temperature dependence of the absorption characteristics, which was investigated theoretically under consideration of molecular vibrations. The simulations matched very well with the experimentally measured absorption spectra which leads to a number of important findings.

The authors discovered that the zero-point vibrations, mediated by electron-phonon interaction, cause a considerable absorption bandwidth. This leads to reemission of a part of the energy which is unused and hence reduces the open-circuit voltage. These voltage losses can now be predicted from electronic and vibronic molecular parameters. What is unusual is that this effect is strong even at room temperature and can significantly reduce the efficiency of the organic solar cell. Which strategies to reduce these vibration-induced voltage losses could be applied is being discussed by the authors for a larger number of systems and different heterojunction geometries.