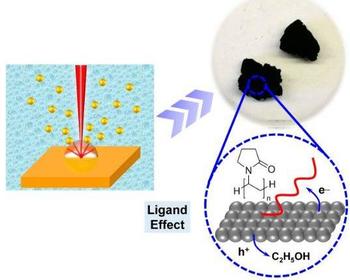 Noble metal aerogels (NMAs) are an emerging class of porous materials embracing nano-sized highly-active noble metals and porous structures, displaying unprecedented performance in diverse electrocatalytic processes. However, various impurities, particularly organic ligands, are often involved in the synthesis and remain in the corresponding products, hindering the investigation of the intrinsic electrocatalytic properties of NMAs. On the other hand, the presence of organic ligands is generally regarded detrimental to the catalytic process because they can block the active sites. However, the authenticity of this fact has not yet been verified in NMA systems because of the lack of way to impart ligands in clean NMAs via a controlled manner.

Ran Du from China is a Alexander von Humboldt research fellow working as postdoc in the physical chemistry group of Professor Alexander Eychmüller at TU Dresden since 2017. In collaboration with Prof. Stephan Barcikowski from the University of Duisburg-Essen, they recently created surface-clean noble metal aerogels by using laser-produced nanoparticles and thus, revealing a new dimension for enhancing electrocatalysis performance for electro-oxidation of ethanol (the anode reaction for direct ethanol fuel cells) by modulating ligand chemistry.

Ran Du and his team prepared various inorganic-salt-stabilized metal nanoparticles by laser ablation, which serve as organic-ligand-free precursors. In this way, they fabricated various impurity-free NMAs (gold (Au), palladium (Pd), and gold-palladium (Au-Pd) aerogels. In this light, the intrinsic electrocatalytic properties of NMAs were unveiled. In addition, these clean gels were used as a platform to deliberately graft specific ligands, by which the ligand-directed modulation of electrocatalytic properties was unambiguously demonstrated. The underlying mechanisms were found to be attributed to electron density modulations posed by different ligands, where the electrocatalytic activity of ethanol oxidation reaction (EOR) has been positively correlated with the oxidation state of the metals. In this regard, the polyvinylpyrrolidone (PVP)-modified Au-Pd bimetallic aerogel delivered a prominent current density of 5.3 times higher than commercial Pd/C (palladium/carbon) and 1.7 times higher than Au-Pd pristine aerogels.

"With this work, we not only provide a strategy to fabricate impurity-free NMAs for probing their intrinsic properties, but also offer a new dimension for devising high-performance electrocatalysts by revisiting the effects of the ligands", assumes Ran Du.