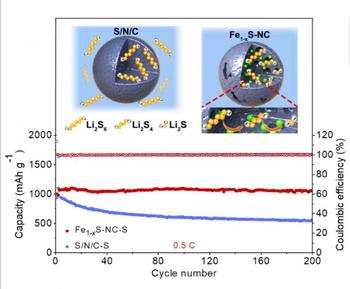 Recently, research groups led by Prof. LIU Jian and Prof. WU Zhongshuai from the Dalian Institute of Chemical Physics (DICP) of the Chinese Academy of Sciences have developed Fe1-xS-decorated mesoporous carbon spheres as the nanoreactor, which can be applied as lithium-sulfur battery cathode. The nanoreactor showed excellent polysulfide catalytic activity and cyclic stability. The study was published in Advanced Energy Materials.

Lithium-sulfur batteries have a high theoretical energy density of 2600 Wh kg-1 and theoretical capacity of 1675 mAh g-1. They are promising as a high-energy battery.

However, the slow conversion reaction dynamics of sulfur in the process of charging and discharging lead to low utilization rate of sulfur and serious shuttle effect. This further causes low capacity and stability of lithium-sulfur batteries.

Therefore, a reasonably designed electrocatalytic system is desired, so that catalytic transformation of polysulfide can be realized efficiently and steadily under high sulfur loading, resulting in high cyclic stability of lithium-sulfur battery.

The nanoreactor is featured with low mass density, high porosity, and highly dispersed electrocatalyst, which significantly improves the adsorption and catalytic conversion capacity of polysulfides.

The researchers found that there was virtually no decay in capacity of Fe1-xS-NC from an initial value of 1070 mAh g-1 after 200 cycles and under a current density of 0.5 C.