Magnetic nanoparticles change their magnetic structure in a magnetic field 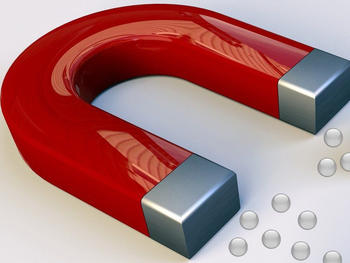 When ultrafine magnetic particles are exposed to an external magnetic field, their magnetic core grows in a previously unexpected way. This was observed by a team of scientists from the University of Cologne (UoC), Forschungszentrum Jülich and the Institut Laue-Langevin in Grenoble, France, by employing polarized neutron scattering.

Nanoparticles are naturally occurring or synthetically produced particles ranging from 1 to 100 nanometres. One nanometre is one millionth of a millimetre. The particles consist of several thousand atoms and are slightly smaller than bacteria. Compared to solids and larger particles, nanoparticles have specific chemical and physical properties, so that completely new materials can be produced from them.

Magnetic nanoparticles consist of a magnetic material containing, for example, iron, nickel, or cobalt. If the particles are small enough, they behave like small magnets that have a north and a south pole and can turn in any direction. Small magnetic particles can be found naturally grown in rocks, but also in some living organisms, such as bacteria, where the mini magnets help the organism orient movement (magnetotaxis). They are important in technology for magnetic fluids (ferrofluids), permanent magnets, magnetic storage media or biomedical applications.

Scientists usually describe the internal structure of a magnetic nanoparticle using a simple, static model. According to this model, magnetic nanoparticles are composed of a magnetic core and a surface that is not – or only slightly – magnetic. Up to now, scientists assumed that magnetism in a nanoparticle is essentially limited to this core area, since it has a certain order of the atoms, so that the magnetic moments or the spins, i.e., the intrinsic momentum of the electrons, can be regularly aligned. In contrast, the spins are randomly aligned in the structurally disordered surface region of the nanoparticle. Therefore, no order and thus no magnetism can develop there.

Dr Sabrina Disch from the UoC’s Department of Chemistry and her research team have now shown by means of neutron scattering on cobalt ferrite nanoparticles that the structure of magnetic nanoparticles changes in the magnetic field. In the experiment, the magnetic core volume increased by up to 20 per cent when an external magnetic field was applied. At the same time, the thickness of the disordered surface area decreased from 0.7 nanometres (at 11 millitesla) to 0.28 nanometres (at 1.2 tesla).

‘The applied magnetic field causes some of the previously disordered magnetic moments in the surface region to become aligned, and thus ordered in a way comparable to the magnetization in the core region. However, a residual area with differently aligned spins remains on the surface, which cannot be ordered by the applied magnetic field,’ said Dr Dominika Zákutná, a former doctoral researcher in Disch’s research group. She did part of her work at the Institut Laue Langevin in Grenoble. In the experiment, this disordered, non-magnetic region makes up 12 per cent of the volume of the nanoparticle even in the highest magnetic field.

Overall, the research showed that the extent of disorder in the spins in the particle surface influences the size of the magnetic particle core. ‘Our results show that the static explanatory model for magnetic nanoparticles, which was prevalent among scientist up to now, is not sufficient and must be expanded to include a magnetic field-dependent component that is determined by the structural disorder,’ concluded Dr Disch.

The international research group used neutron scattering instruments operated by the Institut Laue-Langevin in Grenoble and the Jülich Centre for Neutron Scattering at the Heinz Maier-Leibnitz Zentrum in Garching for these experiments. Neutron scattering is widely used in science to determine structural and dynamic properties of materials. It was employed here to resolve core and surface magnetization of magnetic nanoparticles.