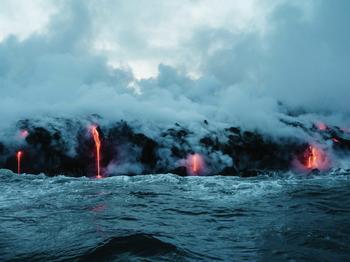 Photo by Buzz Andersen on Unsplash

Chemical reactions driven by the geological conditions on the early Earth might have led to the prebiotic evolution of self-replicating molecules. LMU scientists now report on a hydrothermal mechanism that could have promoted the process.

Life is a product of evolution by natural selection. That’s the take-home lesson from Charles Darwin’s book “The Origin of Species”, published over 150 years ago. But how did the history of life on our planet begin? What kind of process could have led to the formation of the earliest forms of the biomolecules we now know, which subsequently gave rise to the first cell? Scientists believe that, on the (relatively) young Earth, environments must have existed, which were conducive to prebiotic, molecular evolution. A dedicated group of researchers is engaged in attempts to define the conditions under which the first tentative steps in the evolution of complex polymeric molecules from simple chemical precursors could have been feasible. ”To get the whole process started, prebiotic chemistry must be embedded in a setting in which an appropriate combination of physical parameters causes a non-equilibrium state to prevail,” explains LMU biophysicist Dieter Braun. Together with colleagues based at the Salk Institute in San Diego, he and his team have now taken a big step toward the definition of such a state. Their latest experiments have shown the circulation of warm water (provided by a microscopic version of the Gulf Stream) through pores in volcanic rock can stimulate the replication of RNA strands. The new findings appear in the journal Physical Review Letters.

As the carriers of hereditary information in all known lifeforms, RNA and DNA are at the heart of research into the origins of life. Both are linear molecules made up of four types of subunits called bases, and both can be replicated – and therefore transmitted. The sequence of bases encodes the genetic information. However, the chemical properties of RNA strands differ subtly from those of DNA. While DNA strands pair to form the famous double helix, RNA molecules can fold into three-dimensional structures that are much more varied and functionally versatile. Indeed, specifically folded RNA molecules have been shown to catalyze chemical reactions both in the test-tube and in cells, just as proteins do. These RNAs therefore act like enzymes, and are referred to as ‘ribozymes’. The ability to replicate and accelerate chemical transformations motivated the formulation of the ‘RNA world’ hypothesis. This idea postulates that, during early molecular evolution, RNA molecules served both as stores of information like DNA, and as chemical catalysts. The latter role is performed by proteins in today’s organisms, where RNAs are synthesized by enzymes called RNA polymerases.

Ribozymes that can link short RNA strands together – and some that can replicate short RNA templates – have been created by mutation and Darwinian selection in the laboratory. One of these ‘RNA polymerase’ ribozymes was used in the new study. Acquisition of the capacity for self-replication of RNA is viewed as the crucial process in prebiotic molecular evolution. In order to simulate conditions under which the process could have become established, Braun and his colleagues set up an experiment in which a 5-mm cylindrical chamber serves as the equivalent of a pore in a volcanic rock. On the early Earth, porous rocks would have been exposed to natural temperature gradients. Hot fluids percolating through rocks below the seafloor would have encountered cooler waters at the sea-bottom, for instance. This explains why submarine hydrothermal vents are the environmental setting for the origin of life most favored by many researchers. In tiny pores, temperature fluctuations can be very considerable, and give rise to heat transfer and convection currents. These conditions can be readily reproduced in the laboratory. In the new study, the LMU team verified that such gradients can greatly stimulate the replication of RNA sequences.

One major problem with ribozyme-driven scenario for replication of RNA is that the initial result of the process is a double-stranded RNA. To achieve cyclic replication, the strands must be separated (‘melted’), and this requires higher temperatures, which are likely to unfold – and inactivate – the ribozyme. Braun and colleagues have now demonstrated how this can be avoided. “In our experiment, local heating of the reaction chamber creates a steep temperature gradient, which sets up a combination of convection, thermophoresis and Brownian motion”, says Braun. Convection stirs the system, while thermophoresis transports molecules along the gradient in a size-dependent manner. The result is a microscopic version of an ocean current like the Gulf Stream. This is essential, as it transports short RNA molecules into warmer regions, while the larger, heat-sensitive ribozyme accumulates in the cooler regions, and is protected from melting. Indeed, the researchers were astonished to discover that the ribozyme molecules aggregated to form larger complexes, which further enhances their concentration in the colder region. In this way, the lifetimes of the labile ribozymes could be significantly extended, in spite of the relatively high temperatures. “That was a complete surprise,” says Braun.

The lengths of the replicated strands obtained are still comparatively limited. The shortest RNA sequences are more efficiently duplicated than the longer, such that the dominant products of replication are reduced to a minimal length. Hence, true Darwinian evolution, which favors synthesis of progressively longer RNA strands, does not occur under these conditions. “However, based on our theoretical calculations, we are confident that further optimization of our temperature traps is feasible,” says Braun. A system in which the ribozyme is assembled from shorter RNA strands, which it can replicate separately, is also a possible way forward.