What Do Spiders Have in Common with Batteries? 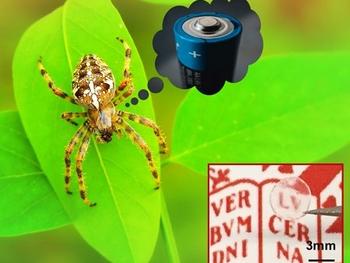 What do spiders have in common with batteries? Nothing so far, but the material developed in the research published in Science Advances on July 17 by G. Portale and co-workers may change this in the future. The inset shows a robust membrane created using a spider silk inspired polyelectrolyte that is capable of efficiently transport protons.

Synthetic polymers have changed the world around us, and it would be hard to imagine a world without them. However, they do have their problems. It is for instance hard from a synthetic point of view to precisely control their molecular structure. This makes it harder to finely tune some of their properties, such as the ability to transport ions. To overcome this problem, University of Groningen assistant professor Giuseppe Portale decided to take inspiration from nature. The result was published in Science Advances on July 17: a new class of polymers based on protein-like materials that work as proton conductors and might be useful in future bio-electronic devices.

'I have been working on proton conducting materials on and off since my PhD', says Portale. 'I find it fascinating to know what makes a material transport a proton so I worked a lot on optimizing structures at the nanoscale level to get greater conductivity.' But it was only a few years ago that he considered the possibility of making them from biological, protein-like structures. He came to this idea together with professor Andreas Hermann, a former colleague at the University of Groningen, now working at the DWI - Leibniz Institute for Interactive Materials in Germany. 'We could immediately see that proton-conducting bio-polymers could be very useful for applications like bio-electronics or sensors', Portale says.

But first, they had to see if the idea would work. Portale: 'Our first goal was to prove that we could precisely tune the proton conductivity of the protein-based polymers by tuning the number of ionisable groups per polymer chain'. To do this, the researchers prepared a number of unstructured biopolymers that had different numbers of ionisable groups, in this case, carboxylic acid groups. Their proton conductivity scaled linearly with the number of charged carboxylic acid groups per chain. 'It was not groundbreaking, everybody knows this concept. But we were thrilled that we were able to make something that worked as expected', Portale says.

For the next step, Portale relied on his expertise in the field of synthetic polymers: 'I have learned over the years that the nanostructure of a polymer can greatly influence the conductivity. If you have the right nanostructure, it allows the charges to bundle together and increase the local concentration of these ionic groups, which dramatically boosts proton conductivity.' Since the first batch of biopolymers was completely amorphous, the researchers had to switch to a different material. They decided to use a known protein that had the shape of a barrel. 'We engineered this barrel-like protein and added strands containing carbocyclic acid to its surface', Portale explains. 'This increased conductivity greatly.'

Unfortunately, the barrel-polymer was not very practical. It had no mechanical strength and it was difficult to process, so Portale and his colleagues had to look for an alternative. They landed on a well-known natural polymer: spider silk. 'This is one of the most fascinating materials in nature, because it is very strong but can also be used in many different ways', says Portale. 'I knew spider silk has a fascinating nanostructure, so we engineered a protein-like polymer that has the main structure of spider silk but was modified to host strands of carbocyclic acid.'

The novel material worked like a charm. 'We found that it self-assembles at the nanoscale similarly to spider silk while creating dense clusters of charged groups, which are very beneficial for the proton conductivity', Portale explains. 'And we were able to turn it into a robust centimetre-sized membrane.' The measured proton conductivity was higher than any previously known biomaterials, but they are not there yet according to Portale: 'This was mainly fundamental work. In order to apply this material, we really have to improve it and make it processable.'

But even though the work is not yet done, Portale and his co-workers can already dream about applying their polymer: 'We think this material could be useful as a membrane in fuel cells. Maybe not for the large scale fuel cells that you see in cars and factories, but more on a small scale. There is a growing field of implantable bio-electronic devices, for instance, glucose-powered pacemakers. In the coming years, we hope to find out if our polymer can make a difference there, since it is already bio-compatible.'

For the short term, Portale mainly thinks about sensors. 'The conductivity we measure in our material is influenced by factors in the environment, like humidity or temperature. So if you want to store something at a certain humidity you can place this polymer between two electrodes and just measure if anything changes.' However, before all these dreams come true, there are a lot of questions to be answered. 'I am very proud that we were able to control these new materials on a molecular scale and build them from scratch. But we still have to learn a lot about their capabilities and see if we can improve them even further.'