Separation of Trace Acetylene from Ethylene in Ultramicroporous Metal–Organic Frameworks 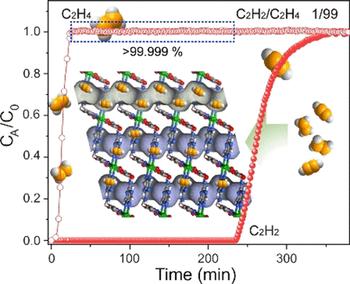 Ethylene, a key feedstock in the chemical industry, often includes traces of acetylene contaminants, which need to be removed. In the journal Angewandte Chemie, researchers describe a robust and regenerable porous metal–organic framework that captures acetylene with extraordinary efficiency and selectively. Its synergistic combination of tailor-made pore sizes and chemical docking sites makes the material especially efficient, the study says.

Ethylene is the most important chemical precursor for ethanol and polyethylene and is mainly produced by steam cracking. Although the ethylene fraction is usually very pure (more than 99%), remaining traces of acetylene contaminants can destroy the catalysts used in downstream processes.

As ethylene and acetylene are very similar and only differ in the amount of hydrogen atoms—ethylene has four hydrogen atoms bound to two carbon atoms, acetylene has two—the separation of both gases is elaborate and difficult. The current industrial processes rely on distillation, which consumes a huge amount of energy.

However, hydrocarbon compounds bind to porous substances called metal–organic frameworks (MOFs). MOFs are made of metal ions and organic ligands and contain pores and chemical docking sites that can be designed to capture specific molecules from a stream of gas at ambient conditions. However, for the separation of ethylene and acetylene, the industry demands robust, regenerable, highly selective, and cheap materials, which have not been found so far.

Dan Zhao and his colleagues at the National University of Singapore have now developed a MOF specific for acetylene capture that may meet the demands of extraordinary selectivity and robustness. The scientists focused on an established MOF with nickel sites, but they “opened” up these nickel sites for the binding of more molecules by activating them and exposing them to the pores so that they were able to bind two guest molecules at once.

In addition, the scientists adjusted the pore sizes of the MOF to allow entry only for very small gas molecules, and filled the pore walls with chemical groups that would attract acetylene over ethylene through their stronger electrostatic and chemical interactions.

Thus, combining small pore sizes with the open nickel sites and sites for preferential acetylene binding, the scientists have created a Ni-MOF called Ni3(pzdc)2(7Hade)2 that is extraordinarily selective, robust, stable, and can be regenerated. According to the study, the Ni-MOF purified the ethylene stream by a factor of a thousand and kept the selectivity high across a range of pressures and regeneration cycles. In addition, the Ni-MOF can be prepared in a standard hydrothermal procedure, the scientists say.

The authors point out that the synergy of pore geometry and size, combined with chemical interactions, can be further enhanced and may lead to even more effective separations. This is interesting for industrial application.