Step toward a Circular Economy? 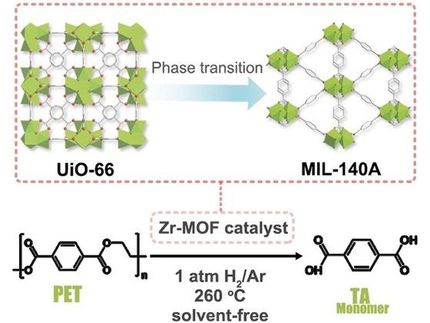 Polyethylene terephthalate (PET) is one of the most common plastics. Discarded PET most often ends up in landfills or in the environment because the rate of recycling remains low. In the journal Angewandte Chemie, a research team has now reported a zirconium-based metal–organic framework material that catalyzes the degradation of PET into its monomers. These can then be reused to make high-value PET, allowing for development of a circular economy.

Almost 70 million tons of PET are produced annually. PET is processed to make products like fibers, drink bottles, and food packaging. Although PET can be melted down and reused, the high temperatures employed result in a lower quality of recycled products, limiting this strategy to only a few cycles. Chemical deconstruction of PET into its monomers would provide starting material for the renewed production of high-quality PET products but it requires large amounts of solvents and reagents, high pressures, and expensive separation of troublesome byproducts. Additives and dyed products could also make things difficult. The alternative would be a catalytic process.

A team led by Omar K. Farha at Northwestern University in Evanston, USA has now reported a catalyst that breaks PET waste down at 260 °C into the building blocks terephthalic acid (TA) and mono-methyl terephthalate (MMT) in yields up to 98 %. The catalyst belongs to a class of materials known as metal–organic frameworks (MOFs), which are porous structures with metals at the nodes and organic molecules linking them. The researchers chose to use UiO-66, a well-known zirconium-based MOF that can easily be produced on a large scale. UiO-66 consists of clusters containing six zirconium atoms as nodes, which are connected by six terephthalic acid molecules as linkers.

Extensive structural analyses showed that during deconstruction of PET, UiO-66 surprisingly rearranges into a different form with the same composition: MIL-140A, which is a framework of seven-coordinate zirconium oxide chains that are linked to six other chains by terephthalic acid bridges. This rearrangement only causes a slight decrease in the catalytic activity.

Detailed mechanistic studies indicate that the primary pathway for the PET deconstruction is a β-scission. This reaction also plays an important role in thermolysis but proceeds at a significantly lower temperature in the presence of the catalyst. Under hydrogen, the deconstruction also proceeds via hydrogenolysis. Neither polyethylene or polypropylene additives nor dying of the PET disrupted the deconstruction process.

These results illustrate the potential of established MOFs as a new class of polymer-deconstructing catalysts to overcome longstanding challenges related to plastic waste.