Researchers dramatically downsize technology for fingerprinting drugs and other chemicals 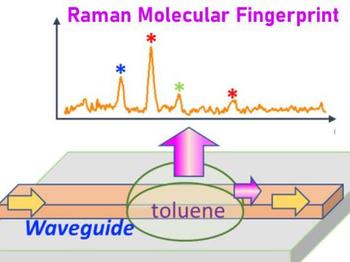 As new infectious diseases emerge and spread, one of the best shots against novel pathogens is finding new medicines or vaccines. But before drugs can be used as potential cures, they have to be painstakingly screened for composition, safety and purity, among other things. Thus, there is an increasing demand for technologies that can characterize chemical compounds quickly and in real time.

Addressing this unmet need, researchers at Texas A&M University have now invented a new technology that can drastically downsize the apparatus used for Raman spectroscopy, a well-known technique that uses light to identify the molecular makeup of compounds.

"Raman benchtop setups can be up to a meter long depending on the level of spectroscopic resolution needed," said Dr. Pao-Tai Lin, assistant professor in the Department of Electrical and Computer Engineering and the Department of Materials Science and Engineering. "We have designed a system that can potentially replace these bulky benchtops with a tiny photonic chip that can snugly fit within the tip of a finger."

In addition, Lin said that their innovative photonic device is also capable of high-throughput, real-time chemical characterization and despite its size, is at least 10 times more sensitive than conventional benchtop Raman spectroscopy systems.

The basis of Raman spectroscopy is the scattering of light by molecules. When hit by light of a certain frequency, molecules perform a dance, rotating and vibrating upon absorbing the energy from the incident beam. When they lose their excess energy, molecules emit a lower-energy light, which is characteristic of their shape and size. This scattered light, known as the Raman spectra, contains the fingerprints of the molecules within a sample.

Typical benchtops for Raman spectroscopy contain an assortment of optical instruments, including lenses and gratings, for manipulating light. These "free-space" optical components take a lot of space and are a barrier for many applications where chemical sensing is required within tiny spaces or locations that are hard to reach. Also, benchtops can be prohibitive for real-time chemical characterization.

As an alternative to traditional lab-based benchtop systems, Lin and his team turned to tube-like conduits, called waveguides, that can transport light with very little loss of energy. While many materials can be used to make ultrathin waveguides, the researchers chose a material called aluminum nitride since it produces a low Raman background signal and is less likely to interfere with the Raman signal coming from a test sample of interest.

To create the optical waveguide, the researchers employed a technique used by industry for drawing circuit patterns on silicon wafers. First, using ultraviolet light, they spun a light-sensitive material, called NR9, onto a surface made of silica. Next, by using ionized gas molecules, they bombarded and coated aluminum nitride along the pattern formed by the NR9. Finally, they washed the assembly with acetone, leaving behind an aluminum waveguide that was just tens of microns in diameter.

For testing the optical waveguide as a Raman sensor, the research team transported a laser beam through the aluminum nitride waveguide and illuminated a test sample containing a mixture of organic molecules. Upon examining the scattered light, the researchers found that they could discern each type of molecule within the sample based on the Raman spectra and with a sensitivity of at least 10 times more than traditional Raman benchtops.

Lin noted since their optical waveguides have very fine width, many of them can be loaded onto a single photonic chip. This architecture, he said, is very conducive to high-throughput, real-time chemical sensing needed for drug development.

"Our optical waveguide design provides a novel platform for monitoring the chemical composition of compounds quickly, reliably and continuously. Also, these waveguides can be easily manufactured at an industrial scale by leveraging the already existing techniques to make semiconductor devices," said Lin. "This technology, we believe, has a direct benefit for not just pharmaceutical industries but even for other industries, like petroleum, where our sensors can be put along underground pipes to monitor the composition of hydrocarbons."