How to generate and steer electrons in liquid water 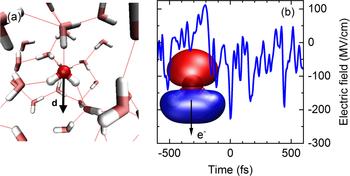 Fig. 1 (a) Snapshot of the arrangement of water molecules in the liquid (red: oxygen atoms, grey; hydrogen atoms). The dotted lines indicate hydrogen bonds between the molecules. Each water molecule possesses an electric dipole moment d which generates an electric field in its environment. The molecular arrangement fluctuates in the femtosecond time domain. (b) Fluctuating electric field of the liquid. The blue line shows the momentary electric field acting on the molecular orbital 3a1 (inset) as a function of time (in femtoseconds). The strongest peaks induce the process of tunnel ionization by which an electron e- can leave the orbital. 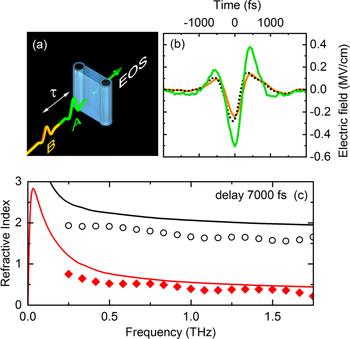 Fig. 2 Two-dimensional terahertz (2D-THz) spectroscopy. (a) Scheme of the experiment. Two THz pulses A (excitation) and B (probe) separated by the delay time t interact with a thin water jet (blue, thickness 50 µm). The transmitted THz field is recorded by a phase-resolving detector which makes use of electrooptic sampling (EOS). (b) Time dependent electric field of pulse A (green) and pulse B (orange). The electric field of pulse B transmitted after excitation by pulse A is shown as a dashed line (delay time between pulses A and B t = 7000 fs). (c) Refractive index of water without THz excitation (solid lines) and after generation of electrons (symbols, electron concentration 5×10-6 moles/liter). Black curves represent the real part of the index of refraction, red curves the imaginary part which is proportional to the THz absorption strength of the water jet. Both real and imaginary part of the refractive index are reduced significantly by the generation of electrons.

Water molecules undergo ultrafast dithering motions at room temperature and generate extremely strong electric fields in their environment. New experiments demonstrate how in presence of such fields free electrons are generated and manipulated in the liquid with the help of an external terahertz field.

The water molecule H2O displays an electric dipole moment due to the different electron densities on the oxygen (O) and hydrogen (H) atoms (Fig. 1a). Such molecular dipoles generate an electric field in liquid water. The strength of this field fluctuates on a femtosecond time scale (1 femtosecond = 10-15 seconds = one billionth of a millionth of a second) and, for short periods, reaches peak values of up to 300 MV/cm (300 million volts per cm, Fig. 1b). In such a high field, an electron can leave its bound state, a molecular orbital (Fig. 1b) and tunnel through a potential energy barrier into the neighboring liquid. This event represents a quantum mechanical ionization process. In equilibrium, the electron returns very quickly to its initial state since the fluctuating electric field has no preferential spatial direction and, thus, the electron does not move away from the ionization site. Because of the highly efficient charge recombination, the number of unbound (free) electrons remains extremely small, on average less than a billionth of the number of water molecules.

Researchers from the Max-Born-Institute in Berlin have now shown that an external electric field with frequencies in the range of 1 terahertz (1 THz = 1012 Hz, approximately 500 times higher than a typical cell phone frequency) enhances the number of free electrons by up to factor of 1000. The THz field has a maximum strength of 2 MV/cm, that is less than 1% of the strength of the fluctuating field in the liquid. However, the THz field has a preferential spatial direction (Fig. 2). Along this direction, electrons generated by the fluctuating field are being accelerated and reach a kinetic energy of approximately 11 eV, the ionization potential of a water molecule. This transport process suppresses charge recombination at the ionization site. The electrons travel over a distance of many nanometers (1 nm = 10-9 m) before they localize at a different site in the liquid. The latter process causes strong changes of the absorption and the refractive index of the liquid (Fig. 2c) by which the dynamic behavior of the electrons can be followed with the method of two-dimensional THz spectroscopy (Fig. 2a).

These surprising results reveal a new aspect of extremely strong electric fields in liquid water, the occurrence of spontaneous events of tunneling ionization. Such events could play an important role in the self-dissociation of H2O molecules into OH-- und H3O+ ions. Moreover, the experiments establish a novel method for the generation, transport, and localization of charges in liquids with the help of strong THz fields. This allows for manipulating the basic electric properties of liquids.