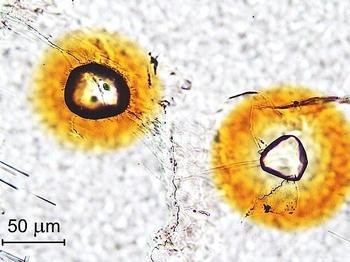 Several minerals suffer radioactive self-irradiation and hence experience long-term changes of their properties. The mineral monazite virtually behaves "just alike Camembert cheese in which holes are drilled": Existing radiation damage heals itself. An international research team led by Lutz Nasdala, Institute of Mineralogy and Crystallography, University of Vienna, conducted an ion-irradiation study that has unravelled the causes of the self-healing of monazite.

In nature there are quite a few minerals that incorporate uranium and thorium in their crystal structure. This causes radioactive self-irradiation that, over geologic periods of time, may destroy the crystal and transform it into a glassy form. As early as in 1893, the Norwegian mineralogist and geologist introduced the term "metamict" to describe this glassy state.

Self-irradiating minerals are currently in the focus of international research. This is because structural radiation damage may affect significantly the physical and chemical properties of minerals. Understanding the causes of these property changes is crucial for the Earth sciences – one of the most important technique to determine ages of minerals and rocks is based on the radioactive decay of uranium – and in materials sciences, as radioactive minerals are analogues of host ceramics for the immobilization of radioactive waste.

So far it was not understood why some minerals (such as zircon, ZrSiO4) are often found in nature in an irradiation-vitrified state, whereas other species (such as monazite, CePO4) – in spite of even higher self-irradiation – never become metamict but, rather, are always observed in a moderately radiation-damaged state. This is first of all explained by insufficient stability of the monazite structure, resulting in inability to accumulate damage over geologic periods of time. Lutz Nasdala elucidates this, greatly simplified, by a comparison with cheese: "It is easily possible, using a pencil, to prick a hole into a hard ('stable') Emmentaler cheese, whereas analogously produced holes in a soft Camembert cheese would 'heal' in no time", Nasdala said.

It has been supposed in the past already that partial self-healing of monazite is not only caused by the low thermal stability of this mineral, but also related to the action of natural alpha particles (that is, energy-rich helium cores that are emitted by an unstable nucleus in an "alpha-decay event"). The latter, however, was in apparent contrast to the observation that crystalline monazite is prone to alpha-irradiation damage.
In the new study the research team could unravel the causes of the self-healing by conducting irradiation experiments. Helium ions with energies of millions of electron volts (analogues of natural alpha particles) create structural damage in crystalline monazite. In contrast, the same helium ions cause structural recovery of radiation-damaged monazite. Hence crystalline monazite would correspond to "Emmentaler cheese" whereas radiation-damaged monazite becomes "Camembert cheese".

Such strong dependence of mineral properties on small changes in the structural state has never been described before. One consequence for Earth sciences research is that experiments with synthetic (that is, non-radiation-damaged) monazite may yield results that are not necessarily relevant for the behaviour of this (always moderately radiation-damaged) mineral in the Earth’s interior.