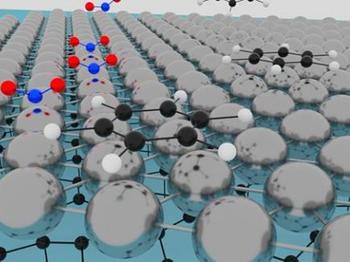 A schematic of platinum atoms deposited on the surface of the carbon 'buffer-layer', which is a graphene-like 2D insulating material grown epitaxially on silicon carbide, that enables two-dimensional growth of platinum.

Researchers at Chalmers University of Technology, Sweden, together with colleagues from other universities, have discovered the possibility to prepare one-atom thin platinum for use as a chemical sensor. The results were recently published in the scientific journal Advanced Material Interfaces.

"In a nutshell, we managed to make a metal layer just one-atom thick - sort of a new material. We found that this atomically-thin metal is super sensitive to its chemical environment. Its electrical resistance changes significantly when it interacts with gases,", explains Kyung Ho Kim, postdoc at the Quantum Device Physics Laboratory at the Department of Microtechnology and Nanoscience at Chalmers, and lead author of the article.

The essence of the research is the development of 2D materials beyond graphene.

"Atomically thin platinum could be useful for ultra-sensitive and fast electrical detection of chemicals. We have studied the case of platinum in great detail, but other metals like palladium produce similar results", says Samuel Lara Avila, Associate Professor at the Quantum Device Physics Laboratory and one of the authors of the article.

The researchers used the sensitive chemical-to-electrical transduction capability of atomically thin platinum to detect toxic gases at the parts-per-billion level. They demonstrated this with detection of benzene, a compound that is carcinogenic even at very small concentrations, and for which no low-cost detection apparatus exists.