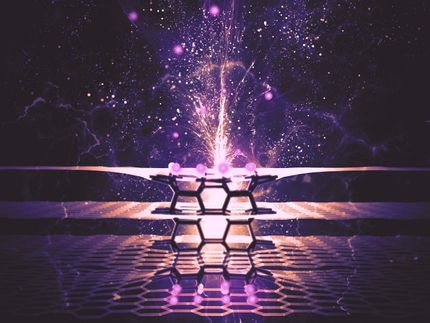 Rice University researchers have expanded their theory on converting graphene into 2D diamond, or diamane. They have determined that a pinpoint of pressure can trigger connections between layers of graphene, rearranging the lattice into cubic diamond.

Marrying two layers of graphene is an easy route to the blissful formation of nanoscale diamond, but sometimes thicker is better.

While it may only take a bit of heat to turn a treated bilayer of the ultrathin material into a cubic lattice of diamane, a bit of pressure in just the right place can convert few-layer graphene as well.

The otherwise chemically driven process is theoretically possible according to scientists at Rice University, who published their most recent thoughts on making high-quality diamane -- the 2D form of diamond -- in the journal Small.

The research led by materials theorist Boris Yakobson and his colleagues at Rice's Brown School of Engineering suggests a pinpoint of pressure on few-layer graphene, the atom-thin form of carbon known for its astonishing strength, can nucleate a surface chemical reaction with hydrogen or fluorine.

From there, the diamondlike lattice should propagate throughout the material as atoms of hydrogen or fluorine alight on the top and bottom and covalently bind to the surfaces, prompting carbon-carbon connections between the layers.

The pressure applied to that one spot -- as small as a few nanometers - is entirely unnecessary for a bilayer but is needed and must be progressively stronger for thicker films, Yakobson said. Making synthetic diamond from bulk graphite at industrial scale requires about 10-15 gigapascals, or 725,000 pounds per square inch, of pressure.

"Only at the nanoscale -- in this case, at nanometer thickness -- does it becomes possible for the surface chemistry alone to change the thermodynamics of the crystal, shifting the phase-change point from very high pressure to practically no pressure," he said.

Single-crystal diamond film for electronics is highly desirable. The material could be used as a hardened insulator or as a heat transducer for cooling nanoelectronics. It could be doped to serve as a wide band gap semiconductor in transistors, or as an element in optical applications.

Yakobson and his colleagues developed a phase diagram in 2014 to show how diamane might be thermodynamically feasible. There's still no easy way to make it, but the new work adds a critical component the earlier research lacked: a way to overcome the energetic barrier to nucleation that keeps the reaction in check.

"So far only bilayer graphene has been reproducibly converted into diamane, but through sheer chemistry," Yakobson said. "Combining it with a pinch of local pressure and the mechanochemistry it triggers seems like a promising path to be tried."

"In thicker films, the barrier rises quickly with the number of layers," added co-author and former Rice postdoctoral associate Pavel Sorokin. "External pressure can reduce this barrier, but chemistry and pressure must play together to deliver a 2D diamond."