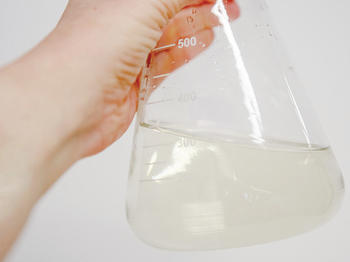 What is the pH value of an aqueous solution? This question is not easily answered on the molecular level.

Nowadays, it is easy to determine an average pH for larger quantities of liquid. It is a challenge, however, to define a local pH value.

Researchers at Ruhr-Universität Bochum have developed a new method to determine a local pH value near a specific site of a biomolecule. A reliable measurement with a pH meter is only been possible in a larger ensemble, or homogeneous bulk. The new procedure, which is based on terahertz spectroscopy, is described by the team from the Cluster of Excellence Ruhr Explores Solvation, Resolv for short, in the journal Angewandte Chemie International Edition, published online in advance on 6 November 2020.

The teams from the Chair of Physical Chemistry II led by Professor Martina Havenith and from the Chair of Theoretical Chemistry led by Professor Dominik Marx cooperated during the work. “There is increased evidence that biological reactions do not depend so much on the global chemical properties of a solution but rather that the local conditions in the immediate vicinity of an enzyme are crucial,” says Martina Havenith. This includes, for example, the pH value or local charge state.

“It is important for us to be able to not only measure these local properties but also to compute predictively  – for instance, if we want to optimize solvation conditions for using enzymes as biocatalysts,” says Dominik Marx.

Tests with the amino acid glycine

The scientists worked with a solution of the amino acid glycine. It has two functional groups that can pick up or release protons. The acid can therefore be present in different protonation states, which can be varied by changing the pH of the solution.

The chemists examined glycine solutions using terahertz (THz) spectroscopy. They use transmit radiation in the THz frequency in the solution, which absorbs part of the radiation. The researchers present the absorption pattern in a given frequency range in the form of a spectrum. At the same time, they also simulate the THz spectra of these aqueous solutions for different pH conditions.

Different spectra depending on pH value

The spectra differed significantly depending on the protonation state of glycine. The two groups investigated why this was the case using complex computer simulations, called ab initio molecular dynamics simulations. This method allows researchers to assign certain areas of a spectrum – called bands – to the movements of different bonds in the molecule. In this way, they showed how the different protonation states were reflected in the spectrum. While deprotonated glycine (high pH) causes almost no absorption in this part of the terahertz spectrum, protonated glycine (low pH) produces clearly visible absorption bands. The spectrum of an intermediate state, the glycine zwitterion (neutral pH), was in between. The researchers thus obtained a kind of fingerprint of protonation, measured as a function of pH. They showed that the intensity of the spectrum in the range of 0 to 15 terahertz correlates with the pH.

In further experiments, the researchers demonstrated that the method also works for other biomolecules, i.e. the amino acid valine and for small peptides. “In the future, this fundamental finding will open up new opportunities for us to non-invasively determine local states of charge on the surface of biomolecules,” summarises Martina Havenith.