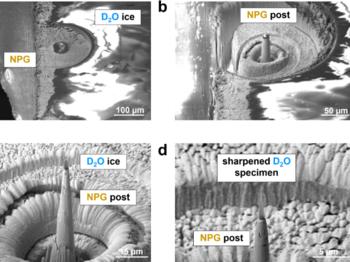 Scanning electron images of in situ APT specimen preparation of an ice sample on nanoporous gold.

How to analyse ice down to its atomic scale? And how to analyse objects embedded in ice without melting it? An international team of material scientists mainly from the Max-Planck-Institut für Eisenforschung (MPIE) found a way to analyse micron-thick layers of ice by atom probe tomography (APT) gaining insights into its microstructure and chemical composition. The MPIE scientists Dr. Ayman El-Zoka, Se-Ho Kim, Dr. Leigh Stephenson and Dr. Baptiste Gault from the “Atom Probe Tomography” group and their colleagues from the Université de Lyon (France) and the University of Toronto (Canada) published their recent findings in the journal Science Advances.

“To analyse materials via atom probe we usually use a focussed ion beam to mill a needle-shaped specimen of only 70 nanometres. This tip is then put under an electric current that causes the specimen to evaporate atom by atom while being captured by a detector. We had to develop a totally new technique to analyse ice without influencing its microstructure through the sample preparation and circumventing its lack of electrical conductivity.”, explains El-Zoka, first-author of the publication. “We dissoluted silver from a silver-gold solid solution in acidic conditions and were thus able to form a 3D open-pore nanostructure.” The scientists used the resulting porous gold structures, so-called nanoporous gold, to embed ice in its pores and analyse it via atom probe tomography. This material was developed for uses that include catalysis and electrochemistry applications but was never used before for atom probe tomography. “Applying this technique paves the way for the analysis of solute effects in confined freezing nano-objects, and biological materials in their native environment.”, states Gault, head of the atom probe group. “Team ice”, as the group is now called by their MPIE colleagues, is now able to measure solute compositions at grain boundaries in ice. These impurities will affect the fracture response of the ice, which could have far reaching implications for the melting behaviour of ice from the poles for instance.

The researchers are aiming to further optimize the technique in terms of changing the pore size, the nanoporous metal and the cooling rate to obtain amorphous ice in order to completely freeze an object and its surroundings.