The Missing Step in the Water Warmup: First Bend and then Turn 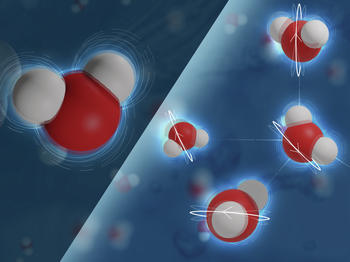 Water molecules can absorb energy from light, which results in a bending of the molecule. However, to transfer energy from one molecule to the other, the bending motion must first be converted into a rotation of the same molecule.

The water on Earth makes our planet inhabitable. It absorbs the Sun’s energy and releases it in the form of heat. An international research collaboration headed by the Max Planck Institute for Polymer Research (MPI-P) has now shown how and how fast the stored energy in the water molecules is released to heat strongly depends on the radiation's energy. The scientists found that the energy of a bent water molecule can be rapidly released by making the water molecule rotate. This rotating molecule can then transfer its energy to surrounding water molecules and heat the water.

Water molecules, as any other kind of molecule, can "dance". If we could look at them with a very high-power magnifying glass, we would see them wiggle and jiggle: they can move, rotate, and vibrate by tilting and expanding their different bonds. Such motion can be triggered by absorbing radiation at specific energies. Since each water molecule is strongly connected to its neighbors through the so-called hydrogen-bond network, one water molecule can interact with its neighbors, and they "dance" together as in a "group dance".

When light shines on water – for instance, the infrared light emitted by the Sun – each water molecule absorbs the energy individually and stores it by bending or stretching its chemical bonds. This means that the O and H atoms in the water molecule can move relative to each other. However, this is not enough to increase the water temperature. Only when the energy is transferred such that it accelerates translations and rotations of all water molecules the water heats up.

Many studies have contributed to understanding the possible pathways behind the dissipation of energy from a stretched water molecule into heat. However, how the energy from a bending water molecule is converted into heat has remained unclear for a long time. Understanding this piece of the puzzle is interesting per se and represents an intermediate step in the dissipation of energy after absorption of radiation with higher energy.

Researchers from the Max Planck Institute for Polymer Research (MPI-P), the University of Tokyo, Osaka University, and National Chiao Tung University have found that a bent water molecule's energy can readily be released into a rotational motion. To understand the underlying mechanism, the group of Dr. Yuki Nagata, in the department of Prof. Dr. Mischa Bonn at the MPI-P, together with international collaborators, has examined such energy transfer in water using advanced experimental spectroscopic and molecular dynamics simulations techniques. They have found that, although water molecules are strongly connected, the energy of a bending motion of a water molecule cannot be used to bend a neighboring water molecule. However, this energy, after being rapidly released into a rotation of that same molecule, can then propagate to the surrounding water molecules. This release of the stored energy into a rotational motion can occur so efficiently in liquid water because of the presence of the hydrogen-bonding network that allows water to perform a "group dance" and easily involve its neighbors in it. The results have now been published in the journal "Nature Communications".

"The Sun emits radiation over a very broad spectral range encompassing the UV, visible and infrared spectrum. Not all of this radiation reaches the Earth because it is absorbed by water vapor and other gases －like oxygen (O2) and carbon dioxide (CO2)－present in the atmosphere. Once the radiation reaches the surface of our planet, it is further absorbed by water bodies. Water, therefore, directly affects climate and contributes to making our planet inhabitable. Water absorbs energy that is then converted into heat. The efficiency of this energy dissipation into heat is very important and depends on how fast the energy absorbed by one water molecule can be distributed to other water molecules." explains Dr. Yuki Nagata, who led the collaborative study. He adds: "Since the energy in the bending motion of water molecules is relatively low, dissipation of absorbed radiation with higher energy always involves this step and our study reveals the missing piece of the water’s energy dissipation mechanism. The fundamental understanding of the water’s vibrational energy transfer can help to better model chemical and physical processes in liquid water."