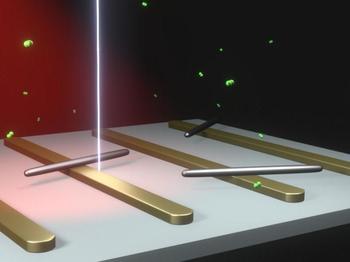 Depiction of the experimental setup where palladium nanorods lie atop gold nanobars. In this image, an electron beam is directed at the sample to watch the catalytic interactions between the hydrogen molecules (in green) and the palladium catalyst. The light driving the illumination is shown in red.

Like a person breaking up a cat fight, the role of catalysts in a chemical reaction is to hurry up the process - and come out of it intact. And, just as not every house in a neighborhood has someone willing to intervene in such a battle, not every part of a catalyst participates in the reaction. But what if one could convince the unengaged parts of a catalyst to get involved? Chemical reactions could occur faster or more efficiently.

In a proof-of-concept experiment, rods of palladium that were approximately 1/200th the width of a human hair served as catalysts. The researchers placed these nanorods above gold nanobars that focused and "sculpted" the light around the catalyst. This sculpted light changed the regions on the nanorods where chemical reactions - which release hydrogen - took place. This work, published Jan. 14 in Science, could be an early step toward more efficient catalysts, new forms of catalytic transformations and potentially even catalysts capable of sustaining more than one reaction at once.

"This research is an important step in realizing catalysts that are optimized from the atomic-scale to the reactor-scale," said Dionne, associate professor of materials science and engineering who is senior author of the paper. "The aim is to understand how, with the appropriate shape and composition, we can maximize the reactive area of the catalyst and control which reactions are occurring."

Simply being able to observe this reaction required an exceptional microscope, capable of imaging an active chemical process on an extremely small scale. "It's difficult to observe how catalysts change under reaction conditions because the nanoparticles are extremely small," said Katherine Sytwu, a former graduate student in the Dionne lab and lead author of the paper. "The atomic-scale features of a catalyst generally dictate where a transformation happens, and so it's crucial to distinguish what's happening within the small nanoparticle."

For this particular reaction - and the later experiments on controlling the catalyst - the microscope also had to be compatible with the introduction of gas and light into the sample.

To accomplish all of this, the researchers used an environmental transmission electron microscope at the Stanford Nano-Shared Facilities with a special attachment, previously developed by the Dionne lab, to introduce light. As their name suggests, transmission electron microscopes use electrons to image samples, which allows for a higher level of magnification than a classic optical microscope, and the environmental feature of this microscope means that gas can be added into what is otherwise an airless environment.

"You basically have a mini lab where you can do experiments and visualize what's happening at a near-atomic level," said Sytwu.

Under certain temperature and pressure conditions, hydrogen-rich palladium will release its hydrogen atoms. In order to see how light would affect this standard catalytic transformation, the researchers customized a gold nanobar - designed using equipment at the Stanford Nano-Shared Facilities and the Stanford Nanofabrication Facility - to sit below the palladium and act as an antenna, collecting the incoming light and funneling it to the nearby catalyst.

"First we needed to understand how these materials transform naturally. Then, we started to think about how we could modify and actually control how these nanoparticles change," said Sytwu.

Without light, the most reactive points of the dehydrogenation are the two tips of the nanorod. The reaction then travels through the nanorod, popping out hydrogen along the way. With light, however, the researchers were able to manipulate this reaction so that it traveled from the middle outward or from one tip to the other. Based on the location of the gold nanobar and the illumination conditions, the researchers managed to produce a variety of alternative hotspots.

This work is one of the rare instances showing that it is possible to tweak how catalysts behave even after they are made. It opens up significant potential for increasing efficiency at the single-catalyst level. A single catalyst could play the role of many, using light to perform several of the same reactions across its surface or potentially increase the number of sites for reactions. Light control may also help scientists avoid unwanted, extraneous reactions that sometimes occur alongside desired ones. Dionne's most aspirational goal is to someday develop efficient catalysts capable of breaking down plastic at a molecular level and transforming it back to its source material for recycling.

Dionne emphasized that this work, and whatever comes next, would not be possible without the shared facilities and resources available at Stanford. (These researchers also used the Stanford Research Computing Center to do their data analysis.) Most labs cannot afford to have this advanced equipment on their own, so sharing it increases access and expert support.

"What we can learn about the world and how we can enable the next big breakthrough is so critically enabled by shared research platforms," said Dionne, who is also senior associate vice provost for research platforms/shared facilities. "These spaces not only offer critical tools, but a really amazing community of researchers."