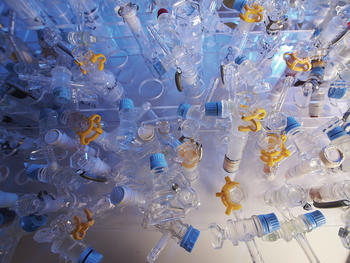 “The introduction of functional groups imparts various properties to these rings.“

Two new catalysts for aromatics refinement using fluorine compounds and a new fluorine building block are among the results achieved at the Leibniz Institute for Catalysis in Rostock (LIKAT) in the past year. In laboratories around the world, fluorine is considered a hot element when it comes to increasing the effect of substances. For example, the dose of drugs - and their side effects - could be lowered and the use of agrochemicals reduced. However, it is also a "difficult element," says Dr. Helfried Neumann of LIKAT, whose team has now given new impetus to fluorine chemistry.

To laymen it may seem like witchcraft, but to chemists it is part of everyday laboratory life: the exchange of a single atom in a molecule can have a decisive influence on the properties of a substance. If a hydrogen atom is replaced by fluorine in the synthesis of a drug, for example, the organism is able to absorb the drug more quickly or more comprehensively than usual.

Chemists refer to this exchange as substitution. For this, they need catalysts to activate the starting materials. The two new catalysts and the reagent for fluorine chemistry were developed by a group of postdocs and doctoral students led by Dr. Helfried Neumann, gruopu leader of “Homogeneous Catalysis for Live Sciences” at LIKAT. As Dr. Neumann explains, they work for a complete class of so-called aromatics that are found in almost every drug.

Aromatics are ring-shaped hydrocarbons. The most famous representative is the benzene ring, probably also known to less interested laymen from chemistry lessons. Because of its discovery history alone: the ring structure of benzene had appeared to August Kekulé (1829-1896) in a dream.

Functional groups impart various properties to these rings. For example, the five-membered aromatic pyrazole compound contains two nitrogen atoms and three CH groups, each consisting of a carbon atom (C) and a hydrogen atom (H). In order to provide pyrazole compounds with innovative properties, the LIKAT chemists catalytically replace one H in each molecule with a fluorine atom (F) or a fluorinated hydrocarbon.
Helfried Neumann: "Fluorine has a similar atomic radius to hydrogen, so it fits well into the molecular geometry. After the substitution, the molecule is significantly more fat-soluble than before." Depending on how many CH groups in the molecule are replaced by CF groups, the new properties can be varied.

If, for example, the pyrazole in an active medical ingredient is replaced by fluorinated pyrazole, the drug can penetrate cell membranes more easily and reach its site of action in a more targeted manner. Such an effect of substitution with fluorine is also conceivable for fertilizers and other agrochemicals. In their research, Dr. Neumann's group cooperated with the Swiss company Lonza, a chemical supplier. In addition to scientific publications, published in the journals NATURE CHEMISTRY, CHEMICAL COMMUNIKATION und CATALYSIS SCIENCE & TECHNOLOGY, patents have also been filed.

Fluorine chemistry is currently one of the most sought-after fields of research. Fluorine is the element with the greatest electronegativity, that means it is particularly good at attracting electrons to itself and therefore combines easily with other elements. The best-known fluorine compounds are chlorofluorocarbons (CFCs), which were used as propellants. But for a long time, they endangered the atmosphere because they attacked the ozone layer. This is slowly recovering since CFCs were banned from coolants, spray, and other everyday substances. In the laboratory, handling CFCs is harmless, as Dr. Neumann points out, because they serve as starting materials in catalytic processes and are chemically bound.

To produce the first of the two new catalysts, a cobalt salt bound to a nitrogen-containing carbon skeleton is applied to a material that acts as a support. The whole thing is pyrolyzed, explains Helfried Neumann: at 800 degrees Celsius, the cobalt complex undergoes an "incredibly complicated reshaping process." These extreme processes usually elude observation, which is why they always seem "a little alchemical," as Dr. Neumann says. In the end, cobalt, together with substrate and carrier, forms very active centers that can activate CFCs and react with the CH groups of pyrazoles as desired.

Both the unreacted starting substance, which is also a solvent, and the fluorinated product are usually present in liquid form, in one and the same vessel. The substances must therefore be cleanly separated: the fluorinated pyrazole from the pyrazole without fluorine. Dr. Neumann says, "This is problematic because fluorine and hydrogen are so similar atomically and the two substances are therefore often difficult to distinguish."

Column chromatography with certain solvent mixtures usually helps with the separation. But when high-molecular-weight fluorine building blocks are used, the molecular weight of the product increases. The separation is achieved by evaporating the remaining pyrazole, the product then remains as a solid.