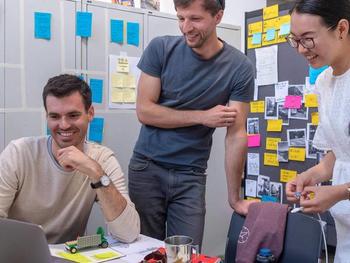 Successful start-ups emerging from the world of academic research are a rarity in Germany. A research project has now conducted the first-ever investigation into the psychological factors impacting the processes when scientists launch companies. It shows that they often struggle to make the transition from a researcher’s outlook to an entrepreneurial mindset. In addition, many start-up teams are unable to utilize their members’ expertise through clear working processes. This can be remedied with makeathons or similar game-like activities and psychological coaching – for the teams and for start-up advisers.

Scientists are constantly developing ideas and new technologies with the potential to generate new products and services. That would seem to make them ideal candidates to launch a start-up. However, successful companies founded by scientists have remained relatively uncommon in Germany.

To learn why, a team of researchers led by the Technical University of Munich (TUM) and representing the fields of entrepreneurship, psychology, anthropology and economics investigated the psychology in start-up processes, applying four different perspectives and methods: First, they spent several months surveying around 280 start-up founders across Germany to learn about the influence of psychological factors such as motivation, stress and frustration, personality structure and trust impact success. Second, they worked with around 50 start-up teams in experimental settings to analyze by video how they exchange information and make decisions.

Furthermore, the team observed and interviewed around 200 participants at four makeathons at TUM. In makeathons, teams spend from three days to two weeks developing an entrepreneurial idea and a product with the support of coaches. A member of the research team acted as such a coach, utilizing a familiar method from anthropology in which researchers become part of the object of their research while making observations. And finally, the group spent nine months interviewing 12 differently composed start-up teams to analyze in detail how academic teams work together in the start-up process.

The gap between meticulous care and pragmatism

The interdisciplinary studies reveal psychological factors that impede start-up processes both on the individual level and on the team and organizational level:

When scientists go into business, they need to bridge the gap between the meticulous mindset of a researcher and the pragmatic approach needed as an entrepreneur. Many find this difficult. They focus more on developing their technology and less on meeting customer needs.

There were also obstacles to cooperation within the team. Successful start-up teams have the ability to combine knowledge from different disciplines through clear working processes and agreed communication formats. But only one third of the teams investigated succeeded in making comprehensive use of the expertise of the individual members.

There were also shortcomings in the support provided to the teams. Many start-up advisers work with more than 20 teams at their universities. Their role in providing business advice leaves them little time to address the psychological dynamics in the start-up teams. Some teams also tend to overstate their progress and overpraise their team – sometimes subconsciously – in consulting sessions.

The project also highlights psychological factors that bolster start-up processes. These formed the basis for the research group’s recommendations on how universities can provide better support for entrepreneurship:

The best way for universities to start entrepreneurship training is through game-like activities. In interdisciplinary formats such as makeathons, participants not only learn new things – they also discover that entrepreneurship can be fun. This focus, with no business pressures, helps participants to acquire initial entrepreneurial skills such as good planning, how to deal with setbacks, and attitudes such as a user-focused approach. After this learning experience, many participants strongly identify with the role of entrepreneur.

Coaching helps them to reflect on the dual role of researcher and entrepreneur and to develop a constructive dynamic in the team. The coaching should raise awareness at an early stage for typical challenges such as self-management, time management, leadership or nonviolent communication. It should also teach methods for working professionally with others.

“Teams that are serious about succeeding with their start-up need individual support. We recommend to complement the advice on business aspects with personality-based and team-oriented coaching. This helps to mediate conflicts and disagreements between team members and will develop competencies so that failures in the team do not lead to the failure of the company,” says Nicola Breugst, Professor of Entrepreneurial Behavior at TUM, who led the project along with Prof. Holger Patzelt from the Chair of Entrepreneurship.

Universities should also provide their start-up advisors with psychological training to help them identify and moderate team psychology effects and their impacts. That will also enable them to recognize contradictions in the way a team presents itself more easily and thus act more quickly. The research group also recommends that advisers should be located as near as possible to the start-up teams they are supporting and attend meetings with potential partners, customers and investors.

The study team also suggests to firmly anchor entrepreneurship in universities through the support of university leadership, greater visibility for entrepreneurial role models, and by opening up space for entrepreneurial ideas, for example by offering sabbaticals to scientists launching start-ups. Other factors for success include cross-disciplinary cooperation to bring together different perspectives on a topic and the ongoing exchange of ideas with the private sector.