An electrode material with modified surface atoms generates more electrical current, which drives the sunlight-powered reactions that split water into oxygen and hydrogen 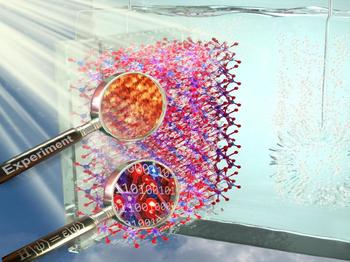 Through a tight coupling of experiment and theory, scientists showed at the atomic level how changes in the surface composition of a photoelectrode play a critical role in photoelectrochemical performance.

Scientists have demonstrated that modifying the topmost layer of atoms on the surface of electrodes can have a remarkable impact on the activity of solar water splitting. As they reported in Nature Energy on Feb. 18, bismuth vanadate electrodes with more bismuth on the surface (relative to vanadium) generate higher amounts of electrical current when they absorb energy from sunlight. This photocurrent drives the chemical reactions that split water into oxygen and hydrogen. The hydrogen can be stored for later use as a clean fuel. Producing only water when it recombines with oxygen to generate electricity in fuel cells, hydrogen could help us achieve a clean and sustainable energy future.

"The surface termination modifies the system's interfacial energetics, or how the top layer interacts with the bulk," said co-corresponding author Mingzhao Liu, a staff scientist in the Interface Science and Catalysis Group of the Center for Functional Nanomaterials (CFN), a U.S. Department of Energy (DOE) Office of Science User Facility at Brookhaven National Laboratory. "A bismuth-terminated surface exhibits a photocurrent that is 50-percent higher than a vanadium-terminated one."

"Studying the effects of surface modification with an atomic-level understanding of their origins is extremely challenging, and it requires tightly integrated experimental and theoretical investigations," said co-corresponding author Giulia Galli from the University of Chicago and DOE's Argonne National Laboratory.

"It also requires the preparation of high-quality samples with well-defined surfaces and methods to probe the surfaces independently from the bulk," added co-corresponding author Kyoung-Shin Choi from the University of Wisconsin-Madison.

Choi and Galli, experimental and theoretical leaders in the field of solar fuels, respectively, have been collaborating for several years to design and optimize photoelectrodes for producing solar fuels. Recently, they set out to design strategies to illuminate the effects of electrode surface composition, and, as CFN users, they teamed up with Liu.

"The combination of expertise from the Choi Group in photoelectrochemistry, the Galli Group in theory and computation, and the CFN in material synthesis and characterization was vital to the study's success," commented Liu.

Bismuth vanadate is a promising electrode material for solar water splitting because it strongly absorbs sunlight across a range of wavelengths and remains relatively stable in water. Over the past few years, Liu has perfected a method for precisely growing single-crystalline thin films of this material. High-energy laser pulses strike the surface of polycrystalline bismuth vanadate inside a vacuum chamber. The heat from the laser causes the atoms to evaporate and land on the surface of a base material (substrate) to form a thin film.

"To see how different surface terminations affect photoelectrochemical activity, you need to be able to prepare crystalline electrodes with the same orientation and bulk composition," explained co-author Chenyu Zhou, a graduate researcher from Stony Brook University working with Liu. "You want to compare apples to apples."

As grown, bismuth vanadate has an almost one-to-one ratio of bismuth to vanadium on the surface, with slightly more vanadium. To create a bismuth-rich surface, the scientists placed one sample in a solution of sodium hydroxide, a strong base.

"Vanadium atoms have a high tendency to be stripped from the surface by this basic solution," said first author Dongho Lee, a graduate researcher working with Choi. "We optimized the base concentration and sample immersion time to remove only the surface vanadium atoms."

To confirm that this chemical treatment changed the composition of the top surface layer, the scientists turned to low-energy ion scattering spectroscopy (LEIS) and scanning tunneling microscopy (STM) at the CFN.

In LEIS, electrically charged atoms with low energy--in this case, helium--are directed at the sample. When the helium ions hit the sample surface, they become scattered in a characteristic pattern depending on which atoms are present at the very top. According to the team's LEIS analysis, the treated surface contained almost entirely bismuth, with an 80-to-20 ratio of bismuth to vanadium.

"Other techniques such as x-ray photoelectron spectroscopy can also tell you what atoms are on the surface, but the signals come from several layers of the surface," explained Liu. "That's why LEIS was so critical in this study--it allowed us to probe only the first layer of surface atoms."

In STM, an electrically conductive tip is scanned very close to the sample surface while the tunneling current flowing between the tip and sample is measured. By combining these measurements, scientists can map the electron density--how electrons are arranged in space--of surface atoms. Comparing the STM images before and after treatment, the team found a clear difference in the patterns of atomic arrangements corresponding to vanadium- and bismuth-rich surfaces, respectively.

"Combining STM and LEIS allowed us to identify the atomic structure and chemical elements on the topmost surface layer of this photoelectrode material," said co-author Xiao Tong, a staff scientist in the CFN Interface Science and Catalysis Group and manager of the multiprobe surface analysis system used in the experiments. "These experiments demonstrate the power of this system for exploring surface-dominated structure-property relationships in fundamental research applications."

Simulated STM images based on surface structural models derived from first-principle calculations (those based on the fundamental laws of physics) closely matched the experimental results.

"Our first-principle calculations provided a wealth of information, including the electronic properties of the surface and the exact positions of the atoms," said co-author and Galli Group postdoctoral fellow Wennie Wang. "This information was critical to interpreting the experimental results."

After proving that the chemical treatment successfully altered the first layer of atoms, the team compared the light-induced electrochemical behavior of the treated and nontreated samples.

"Our experimental and computational results both indicated that the bismuth-rich surfaces lead to more favorable surface energetics and improved photoelectrochemical properties for water splitting," said Choi. "Moreover, these surfaces pushed the photovoltage to a higher value."

Many times, particles of light (photons) do not provide enough energy for water splitting, so an external voltage is needed to help perform the chemistry. From an energy-efficiency perspective, you want to apply as little additional electricity as possible.

"When bismuth vanadate absorbs light, it generates electrons and electron vacancies called holes," said Liu. "Both of these charge carriers need to have enough energy to do the necessary chemistry for the water-splitting reaction: holes to oxidize water into oxygen gas, and electrons to reduce water into hydrogen gas. While the holes have more than enough energy, the electrons don't. What we found is that the bismuth-terminated surface lifts the electrons to higher energy, making the reaction easier."

Because holes can easily recombine with electrons instead of being transferred to water, the team did additional experiments to understand the direct effect of surface terminations on photoelectrochemical properties. They measured the photocurrent of both samples for sulfite oxidation. Sulfite, a compound of sulfur and oxygen, is a "hole scavenger," meaning it quickly accepts holes before they have a chance to recombine with electrons. In these experiments, the bismuth-terminated surfaces also increased the amount of generated photocurrent.

"It's important that electrode surfaces perform this chemistry as quickly as possible," said Liu. "Next, we'll be exploring how co-catalysts applied on top of the bismuth-rich surfaces can help expedite the delivery of holes to water."