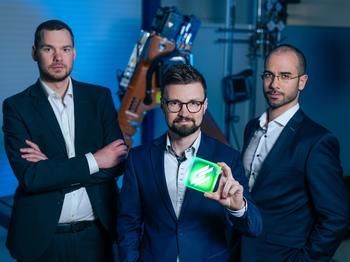 The technology, which has been researched at Fraunhofer IWS and TU Dresden over the past decade, is now ready for the market. For this and the associated hardware solutions Fusion Bionic is the world's first commercial supplier.

A researcher team from industry and the Fraunhofer Institute for Material and Beam Technology IWS is spinning off a high-tech company called “Fusion Bionic”. The company aims to bring lotus effects and other functional microstructures from nature to technical surfaces such as air wings and implants using globally cutting-edge solutions for laser interference technology. The team received support from Fraunhofer-Gesellschaft’s AHEAD project, which specializes in technology transfer.

Modern light interference technologies in Dresden make it possible: By means of “Direct Laser Interference Patterning” (DLIP for short), the founders of Fusion Bionic, a Fraunhofer IWS spin-off, can now quickly transfer lotus effects and other sophisticated structural tricks of nature to technical surfaces such as battery components, implants or even airplanes. These microscopic surface patterns design implants to be more compatible or, with their anti-icing structures, prevent air passengers from having to wait forever for takeoff to the sunny south in winter due to deeply frozen wings. The technology, which has been researched at Fraunhofer IWS and TU Dresden over the past decade, is now ready for the market. Dr. Tim Kunze, who previously headed the Surface Functionalization group at Fraunhofer IWS, has therefore launched Fusion Bionic in April 2021 with a team from science and industry. The company name refers to the fusion of nature-inspired effects into technical product surfaces, i. e. a kind of symbiosis of biology and technology along the lines of bionics. “The Fraunhofer AHEAD program provided us with a great deal of help in this regard. In an entrepreneurial environment with the support of experts from Fraunhofer-Gesellschaft, we sharpened our business model as well as the product and positioned our team well for the start-up,” says Tim Kunze. The Fraunhofer research transfer into practice also aims to provide new jobs and value creation in Dresden and Saxony. The number of employees is expected to grow to around ten by the end of 2022.

“We have been researching in this area jointly at Fraunhofer IWS and TU Dresden for ten years,” says Institute Director Prof. Christoph Leyens, looking back on the development path to the spin-off. “Today, Dresden’s scientists are pioneers in this technology and are inspiring more and more researchers in Europe as well as Asia to take a closer in-depth look at interference technology.” Nearly endless possibilities are also predicted by Prof. Andrés Fabián Lasagni, who brought this technology to Dresden and currently heads the Chair of Large-Area Laser Based Surface at Technische Universität Dresden. He explains that laser interference patterning transfers evolutionary advantages developed by reptiles, butterflies, sharks and other animals over millions of years to the technological world in fast motion. “Many insects, for example, have antibacterial surfaces that ensure they don't get sick as quickly,” he says. “We can now create all these effects with laser structuring. The prospects in medical technology, mechanical engineering and many other industries are enormous,” Leyens adds. ”Without the pioneering work of Prof. Andrés Lasagni, we wouldn't be where we are today.”

The interference structures are the special highlight of the Dresden technology: Instead of “drawing” the desired structural pattern slowly onto the work piece with a single laser beam, as with a pencil, the DLIP process exposes large areas at high process speeds. Fusion Bionic is the world's first commercial supplier of this process and the associated hardware solutions. In order to benefit from this competitive edge, the founding team now wants to quickly establish a production site in Dresden. Several investors have already expressed keen interest in supporting the scalable technology in Dresden. Kunze's team plans to establish complete laser structuring machines there, as well as standardized DLIP processing modules, which, for example, a medium-sized industrial company can then mount on its robots in the future. As a further promising business field in addition to its own laser machine construction, Fusion Bionic also plans to offer contract structuring and specially developed functional product surfaces. Several companies from the aerospace, automotive and plant engineering industries have already requested solutions from Fusion Bionic. There is also great interest from scientific institutions similar to the parent institute Fraunhofer IWS, which want to investigate further potential in their own research activities. “We are providing entirely new product possibilities with our DLIP technology,” asserts Tim Kunze. “Until now, functional surfaces have usually been created by coatings simply because the laser seemed too slow.” But coatings often do not bring the desired effect and are sometimes not very durable or even harmful to the environment”, he says. “Our functional surface structures offer a new approach to enhancing products. Thanks to interference technology, we can now functionalize surfaces quickly and this solution has become a serious competitor to classic coatings,” adds Tim Kunze.

The founders have already mapped out plans for the coming years: After setting up the first production facilities, system solutions developed in-house will make the technological potential available to more and more branches of industry. “We have already demonstrated this with a project partner for a market-leading supplier of connectors, so hopefully our DLIP solutions will soon enable a new generation of electrical connectors with greater reliability,“ Kunze emphasizes.

How the DLIP process works

In the DLIP process, an optical system splits laser beams into several parts. Subsequently, the Fraunhofer IWS-developed DLIP processing system focuses the partial beams onto the surface, which is to be made water repellent like a lotus flower, for example. Here the beams overlap to form interference patterns similar to those seen in optics experiments in physics classes. The system is based on pulsed beams that successively process surfaces with rapid movement. The laser ablates material at the bright spots, leaving it untouched at the darker ones. Under laboratory conditions, the Fusion Bionic team is already able to process up to 0.9 meters per minute. As a result, very fine structures are created on the surface, some of which are only a few hundred nanometers (millionths of a millimeter) in size, as in a laser texturing process. These ensure, for example, that dirt or ice cannot find grip. But the laser can also bring other functions to the surface, such as greater acceptance of implants by the body or more reliable electrical plug connections.