Scientists have, for the first time, isolated and fully characterised an elusive intermediate in the Water Oxidation Reaction 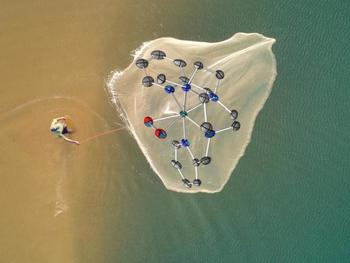 The Water Oxidation Reaction (WOR) is one of the most important reactions on the planet since it is the source of nearly all the atmosphere's oxygen. Understanding its intricacies can hold the key to improve the efficiency of the reaction. Unfortunately, the reaction's mechanisms are complex and the intermediates highly unstable, thus making their isolation and characterisation extremely challenging. To overcome this, scientists are using molecular catalysts as models to understand the fundamental aspects of water oxidation - particularly the oxygen-oxygen bond-forming reaction.

For the first time, scientists in ICIQ's Lloret-Fillol group, who are minutely studying WOR, have isolated and fully characterised an elusive intermediate generated after the oxygen-oxygen bond formation event - the reaction's rate-determining step. The work, an international effort led by ICIQ in collaboration with University of Groningen (The Netherlands) and Synchrotron SOLEIL (France), has been published in Nature Chemistry, "Our work has direct implications in our capacity to look at the oxygen-oxygen bond formation step and the afterwards reaction intermediates," explains Julio Lloret-Fillol, ICIQ group leader and ICREA professor, lead author of the paper.

By modifying the conditions in their catalytic system, the researchers have crystallised the Ru(IV) side-on peroxo generated after the rate determining step of the reaction, the oxygen-oxygen bond formation event. "The paper will help to better understand the mechanism of the oxygen-oxygen bond formation, since it shows direct evidence for a single-site mechanism to form the oxygen-oxygen bond, one of the mechanisms postulated for photosystem II," claims Carla Casadevall, former PhD student of the Lloret group, now a Marie Skłodowska-Curie postdoctoral researcher at the Erwin Reisner group at the University of Cambridge and first author of the paper.

Despite extensive efforts to elucidate its mechanism, WOR is still not fully understood, prompting an ongoing debate with several proposals concerning the formation mechanism of the oxygen-oxygen bond. The researchers have used labelling studies to monitor the intermediates formed both before and after the rate-determining step of WOR. This way, they have been able to provide direct evidence of the formation of the oxygen-oxygen bond by water nucleophilic attack from the metal-oxo.