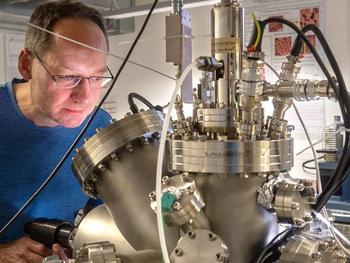 Markus Lackinger transferring a sample inside the ultra-high vacuum chamber by means of a vacuum grabber. This vacuum chamber contains all facilities for preparing and analyzing samples under vacuum.

An international research team led by members from the Technical University of Munich, the Deutsches Museum, the Linköping University has developed a method to manufacture two-dimensional polymers with the thickness of a single molecule. The polymers are formed on a surface by the action of light. The discovery paves the way to new ultrathin and functional materials.

The quest for new two-dimensional materials has rapidly intensified after the discovery of graphene – a supermaterial whose excellent properties include high conductivity and strength, making it incredibly versatile.

Two main approaches are used to create ultrathin materials. In the first, a continuous layer of molecules or atoms is “peeled off” from the bulk of the material. Graphene is an example of such a material.

The other approach, in contrast, involves the construction of the material molecule-by-molecule by producing bonds between the molecules in various ways. The problem is that the materials are often small, fragile and contain many defects. This limits the potential areas of application.

An international research team with members from the Technical University of Munich, the Deutsches Museum and Linköping University, among others, has now developed a new method to manufacture two-dimensional polymers. The discovery makes it possible to develop new ultrathin functional materials with highly defined and regular crystalline structures.

The manufacture, or polymerisation, of the material takes place in two steps. The researchers use a molecule known as “fantrip”. “Fantrip” is a contraction of “fluorinated anthracene triptycene”. This molecule is a merger of two different hydrocarbons – anthracene and triptycene. The specific properties of fantrip cause the molecules to spontaneously arrange themselves into a pattern when they are placed onto a graphite surface covered with an alkane. This process is known as “self-organization”.

The next step is the photopolymerisation itself, when the pattern is to be fixed with the aid of light. The molecules are illuminated by a violet laser that excites the electrons in the outermost electron shell. This causes strong and durable covalent bonds to form between the molecules.

The result is a porous two-dimensional polymer, half a nanometre thick, consisting of several hundred thousand molecules identically linked, in other words, a material with nearly perfect order, right down to the atomic level.

Since the photopolymerisation is carried out on a surface of solid graphite, it is possible to follow the process on the molecular scale using scanning tunnelling microscopy. This shows the newly formed bonds in a persistent network. In order to confirm the structure assignment, the research group led by Jonas Björk has simulated the appearance of the molecular networks under the microscope at different stages of the reaction.

Jonas Björk is assistant professor in the Materials Design Division at the Department of Physics, Chemistry and Biology at Linköping University. He has used high-performance computing resources at the National Supercomputer Centre in Linköping to validate the experiments and understand the key factors that make the method successful.

“We see that the simulations agree well with reality down to the tiniest detail, and we can also understand why our specific system gives such useful results. The next step of the research will be to see whether the method can be used to link other molecules for new two-dimensional and functional materials. By improving the method, we will also be able to control and tailor the type of ultrathin materials we aim to manufacture”, says Jonas Björk.

“Creating covalent bonds between molecules requires a lot of energy. The most common way of supplying energy is to raise the temperature, but this also causes the molecules to start moving. So it won’t work with self-organized molecules, since the pattern would blurr. Using light to create covalent bonds preserves the pattern and fixes it precisely as we want it”, says Markus Lackinger, research group leader at the Deutsches Museum and Technical University of Munich.

“The most obvious application is to use the material as filter or membrane, but applications that we have no idea of at the moment in entirely different contexts may appear on the horizon, also by chance. This is why basic research is so exciting”, says Markus Lackinger.