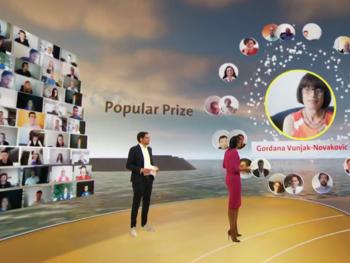 The European Patent Office (EPO) announced the winners of the European Inventor Award 2021, its prestigious annual innovation prize.  The individuals and teams were recognised for their innovative contributions in the fields of nasal drug delivery, DNA-based data storage, nanomaterials in dentistry, solar cells for self-charging devices, organic semiconductors, and advances in tissue engineering.

"In these challenging times, it is inspiring to see the creativity and dedication shown by these inventors in bringing innovative solutions to the world," said EPO President António Campinos. "Their achievements remind us that obstacles can be overcome by applying imagination, knowledge and ingenuity. The ability to take a new idea all the way to market also demands perseverance and a supportive environment for innovation, and the finalists and winners of the European Inventor Award 2021 are all testament to this."

This year's winners were chosen from a pool of hundreds of inventors and teams of inventors put forward for the award; they come from Austria, Germany, India, Norway, Serbia, Sweden, Switzerland, and the United States.

Now in its 15th year, the European Inventor Award is presented annually by the EPO to distinguish outstanding individuals from Europe and beyond who have made an exceptional contribution to society, technological progress and economic growth. The finalists and winners in five categories were selected by an independent international jury. They have all made use of the European patent system to protect their technologies and, in so doing, enabled other researchers and inventors to build on their innovations.

This year's Award ceremony, held for the first time as a digital event, was open to the public, who tuned in from around the world as the winners were announced.

The laureates of the European Inventor Award 2021 are:

Better nasal drug delivery: The Norwegian inventor's medical device uses the nose's natural form and the patient's own breath to improve nasal drug delivery and provide relief for various conditions. The invention helped grow a company that is now stock-exchange listed and develops innovative medical solutions - a breath of fresh air for patients.

DNA-based data storage: The Austrian and Swiss inventors developed a novel method of preserving data converted into genetic code using artificial fossilisation in tiny glass spheres. They created a storage format with the potential to protect valuable data for millennia, as well as a robust DNA barcode: when their miniscule particles are applied to products, they ensure that specific indicators - such as the origin or working conditions - are traceable throughout the supply chain.

Restoring smiles with nanomaterials: This researcher found that nanoclusters could be used in dentistry, resulting in robust, durable and aesthetically pleasing fillings. Her material overcomes many of the limitations of previous dental composites, which were either too weak to be used on biting surfaces, or quickly lost their polish. These tiny clusters have been used in one billion dental restorations worldwide.

Flexible solar cells for portable devices: From their plant in Stockholm, the inventors produce a dye-sensitised solar cell using a new electrode material with very high conductivity that can be custom-printed in almost any shape or colour, and can even generate electricity indoors. Thanks to this versatility, the cells are being integrated into various electronics to create self-charging devices.

Advances in organic semiconductors: The German physicist advanced organic semiconductors by improving their conductivity through a technique called doping, ushering in a new generation of highly efficient organic light-emitting diode (OLED) displays. His OLEDs provide enhanced image brightness, colour resolution and power efficiency in electronic devices. Currently, half of the world's smartphones and many types of ultralight organic solar cells incorporate his technology. He has also founded several companies in a career spanning over 30 years.

Advances in tissue engineering: The Popular Prize, awarded to one of the 15 finalists through an online public vote, this year went to Serbian-American biomedical engineer Gordana Vunjak-Novakovic. She has opened new horizons in regenerative medicine by developing a way of growing new tissue ex vivo (outside the body) using the patient's own cells. The Popular Prize is designed to honour the inventor or team of inventors that have both inspired and impressed the general public with their creativity and genius.