Carbon-containing gases from steel production as a source of raw materials: Covestro starts up mini-plant 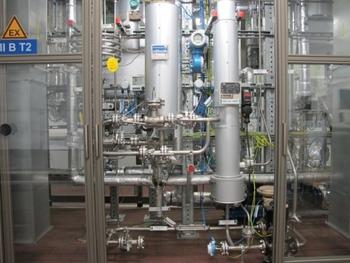 Covestro has started up a miniplant at its Dormagen site to research the use of CO from metallurgical gases.

On the path to climate neutrality, the development of new raw material sources is of central importance. The Carbon2Chem project is investigating, among other things, where cross-sector networking between the steel and chemical industries is possible. The German government is funding the project until 2024. Covestro is contributing its expertise to the Carbon2Polymers subproject.

The objective is to explore the use of carbon monoxide (CO) from steel industry metallurgical gases for the production of high-quality polycarbonates. Covestro has now commissioned a mini-plant for this purpose at its Dormagen site. This is where it is tested whether the quality of the CO from metallurgical gases is sufficient for further processing.

The innovative process has great sustainability potential: Initial life cycle analyses show that around 0.48 kilograms of CO₂ equivalent can be saved per kilogram of CO provided in the steel industry-chemical industry alliance. This means savings of more than 80 percent.

Industrial symbiosis as the key

The lighthouse project proves how important industrial symbiosis is on the path to climate-neutral production in Germany. Covestro has been working closely with thyssenkrupp since 2016. RWTH Aachen University and the Max Planck Institute Mühlheim are also involved in the project. Among other things, they do life-cycle analyses for the processes and test and develop new catalysts.

Dr. Stefanie Eiden heads the Carbon2Polymers subproject at Covestro. She is confident that the knowledge gained could also be helpful for other research projects: “Coke oven gases have the advantage that they bring with them many accompanying substances. If we succeed in processing the CO in such a way that we can use it to produce our high-performance plastics, we can also do the same with other non-fossil-based CO sources.” By the end of the year, it will be evaluated whether the innovative process is economically and ecologically viable.

Setting the course for a climate-neutral circular economy

Dr. Markus Steilemann, CEO of Covestro, sees the Carbon2Polymers project as a further milestone in the development of a global circular economy: “We can only succeed in the fight against climate change if we enter into profitable cooperations. The collaboration with thyssenkrupp illustrates once again the enormous contribution industry can make on the path to greenhouse gas-neutral production. By using coke oven gases, we are further advancing the repeated use of raw materials and thus closing the cycle.”

The industry is receiving support from politicians: the German government is funding the Carbon2Chem project with an additional 75 million euros until 2024. In this way, around 20 million tons of the steel industry’s annual CO₂ emissions in Germany are to be made economically viable in the long term.