A novel microscope pins down the miracle of molecular oxygen 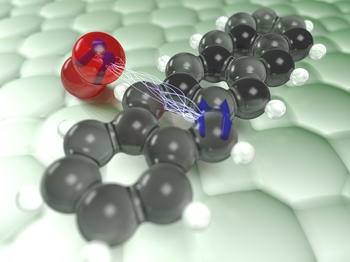 Artist's impression of the interaction of the triplet state (blue arrows) of an individual pentacene molecule (black and white) with an oxygen molecule (red).

Why is it that the colours of a t-shirt fade over time in the sun? Why do you get a sunburn, and why do the leaves of a tree turn brown in the autumn? These questions all have one theme in common, the interplay between dye pigments and ambient oxygen. Every child learns about this chemical reaction in school, the oxidation process in the air that we breathe, so what could possibly be left to research?

Oxygen is an astonishing molecule in that it is magnetic. In liquid form, at very low temperatures, it can be picked up by a magnet much like iron filings can. This property is related to the electrons in the oxygen. All molecules are made up of atomic nuclei and electrons, which in turn tend to behave like miniscule needles of a compass. Usually, these needles arrange in pairs pointing in opposite directions, so that their magnetic forces cancel out. In an oxygen molecule consisting of two oxygen atoms, however, the two compass needles point in the same direction, making oxygen magnetic.

Dye molecules, such as those used to colour a t-shirt, are not magnetic because the compass needles of the electrons point in opposite directions. When light shines on such a molecule, a certain colour of the light will be absorbed, giving the dye its characteristic appearance. In this process of light absorption, the energy of the light is transferred to an electron in the dye molecule, breaking the original pairing of two electrons and allowing the compass needle of the excited electron to spontaneously change its alignment. When this process happens, the electron can no longer return to its original state. The dye molecule becomes magnetic, entering what is referred to as a triplet state.

An international research team directed by Prof. Jascha Repp has now succeeded in revealing how this triplet energy is transferred from one single dye molecule to one single oxygen molecule. This process is of central importance in everyday life, where many oxidation reactions proceed via the excited triplet state. As long as the molecule resides in this state, it retains the energy imparted on it by the light, thereby facilitating chemical reactions. Most chemical reactions, such as combustion, require some initial energy, such as a spark, to begin.

The team now succeeded in tracking this transfer of energy between dye and oxygen molecule directly in space, without destroying the dye molecule. To do this, single molecules were placed on a surface and cooled to very low temperatures close to that of the universe. Using a so-called atomic force microscope consisting of a very fine needle with just one single atom at its tip, the researchers were able to image the individual atoms of the dye molecule by scanning the tip across it. By employing a clever sequence of electrical pulses applied to the dye molecule, it could be driven into the magnetic triplet state in a controlled fashion. The energy transfer from this excited triplet state to oxygen molecules nearby was then tracked in time by measuring miniscule changes in the force acting on the tip.

This novel approach, reported in the leading journal Science, allowed the researchers to probe many different geometries of the arrangement of dye molecule and oxygen. In this way, the interplay between molecular arrangements on the atomic level and the speed at which such energy transfer occurs could be resolved for the first time. The scientists now aim to finally be able to formulate an underlying microscopic framework of fundamental oxidation reactions. Besides the inconvenient fading of t-shirts, such an interplay between molecular triplet excitations is of central significance to a range of technological developments such as in organic light-emitting diodes (OLEDs) and organic solar cells, in photocatalytic energy conversion and photosynthesis, and in photodynamic cancer therapy.