In the trap: New method for cooling charged particles 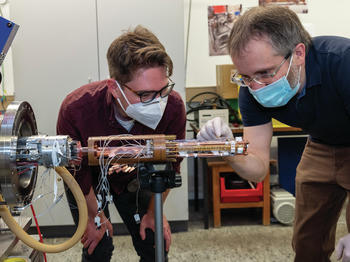 For the first time, physicists have succeeded in successfully realizing a new method for cooling protons using laser-cooled ions - in this case beryllium ions. The innovative feature of the new system is that the two particle types are located in spatially separated traps. This means it is now possible to provide the cooling effect with the help of an electrical resonant circuit over a distance of nine centimeters from one trap to the other. The team at the PRISMA⁺ Cluster of Excellence at Johannes Gutenberg University Mainz (JGU), part of the BASE collaboration, was able to demonstrate that protons can be cooled to significantly lower temperatures in one of the traps than would be possible without beryllium. The new technique can be used for all charged particles, even antiprotons, for which there is no other cooling method in this temperature range. What is particularly exciting is that it should now be possible to conduct experiments in which matter and antimatter can be compared more precisely. The results of the research have been published in the scientific journal Nature. In addition to JGU, the Max Planck Institute for Nuclear Physics in Heidelberg (MPIK) and the Japanese Research Center RIKEN were also significantly involved in the new development, as were the European Organization for Nuclear Research CERN, the GSI Helmholtzzentrum für Schwerionenforschung in Darmstadt and Leibniz University Hannover.

In order to be able to make precise measurements of individual ions, they must be captured and stored in a trap in which they are kept as inert as possible. To achieve this state, energy is removed from the charged particles, which reduces their temperature. With the new two-trap structure, the research team was able to reduce the temperature by about a factor of 10 in comparison with that reached using the previous best methods of cooling protons, thus attaining a temperature close to absolute zero. “The lower the temperature of the particle, the more precisely we can restrict the space in which the particle is present inside the trap. And the more accurately we can locate the particle, the better are the starting conditions and consequently also the results of our precision measurements,” explains Dr. Christian Smorra, physicist at the PRISMA⁺ Cluster of Excellence and co-author of the publication.

Killing two birds with one stone

The new two-trap cooling method comes with even more advantages: It can also be used for antimatter particles because in a single-trap cooling system, the matter and antimatter would immediately destroy each other. The new concept will enable a more precise comparison of protons and antiprotons. “We want to look specifically for any difference between the properties of protons and antiprotons. Our theory says that the two particles behave identically, the only distinction being the opposed charges. It is still unclear why our universe contains so many protons – and therefore matter – but almost no antiprotons, that is antimatter,” points out Matthew Bohman of MPIK, the first author of the study. Bohman has been working on the development of the new cooling method in Mainz since 2018, when he was studying for his doctorate.

Whereas previous methods required distances of 0.1 millimeters or less between the particles to be cooled and the beryllium ions, the current research has shown it is in fact possible to transmit the cooling effect despite spatial separation over a distance of nine centimeters. This creates the basis for further research projects – and enables, for example, uninterrupted and more precise frequency measurements, which the BASE collaboration plans to carry out in the case of antimatter in the context of the search for dark matter. The research group had already investigated trapped antiprotons in a single trap during previous experiments at CERN – however, this was done by cooling them with liquid helium and without employing beryllium ions.

The two-trap method was proposed for the first time in 1990. The concept at the time did not include an electric resonant circuit – instead, the ions were to be connected by a common trap electrode. The advantage of this procedure was that no resistance was present, such as that caused by the resonant circuit, which produces heat and impairs the cooling process. The big disadvantage, however, is the low speed at which the energy of the ions is exchanged. As a result, the temperature of the charged particle does not decrease quickly enough. “The current system represents a practically feasible development of the concept dating back to 1990. In this case, the energy exchange between the traps occurs within one second rather than taking getting on for two minutes,” stresses Dr. Christian Smorra.