Combining sunlight and wastewater nitrate to make the world’s No. 2 chemical 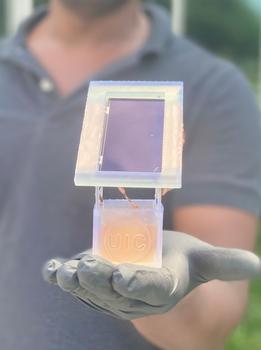 UIC researchers create a sustainable electrochemical system in which a solar cell is attached to a well holding a liquid solution. When charged, nitrates from wastewater in the liquid solution are converted to ammonia.

Engineers at the University of Illinois Chicago have created a solar-powered electrochemical reaction that not only uses wastewater to make ammonia — the second most-produced chemical in the world — but also achieves a solar-to-fuel efficiency that is 10 times better than any other comparable technology.

“This technology and our method have great potential for allowing on-demand synthesis of fertilizers and could have an immense impact on the agricultural and energy sectors in developed and developing countries, and on efforts to reduce greenhouse gases from fossil fuels,” said lead researcher Meenesh Singh, assistant professor of chemical engineering at the UIC College of Engineering.

Ammonia, a combination of one nitrogen atom and three hydrogen atoms, is a key compound of fertilizers and many manufactured products, like plastics and pharmaceuticals. Current methods to make ammonia from nitrogen require enormous amounts of heat, generated by burning fossil fuels, to break the strong bonds between nitrogen atoms so they can bind to hydrogen. This century-old process produces a substantial fraction of global greenhouse gas emissions, which are a driving force of climate change.

Previously, Singh and his colleagues developed an environmentally friendly method to make ammonia by filtering pure nitrogen gas through an electrically charged, catalyst-covered mesh screen in a water-based solution. This reaction used only a tiny amount of fossil fuel energy to electrify the screen, which breaks apart nitrogen atoms, but it produced more hydrogen gas (80%) than ammonia (20%).

Now, the researchers have improved this concept and developed a new method that uses nitrate, one of the most common groundwater contaminants, to supply nitrogen and sunlight to electrify the reaction. The system produces nearly 100% ammonia with nearly zero hydrogen gas side reactions. The reaction needs no fossil fuels and produces no carbon dioxide or other greenhouse gases, and its use of solar power yields an unprecedented solar-to-fuel efficiency, or STF, of 11%, which is 10 times better than any other state-of-the-art system to produce ammonia (about 1% STF).

The new method hinges on a cobalt catalyst, which the researchers describe along with the new process in their paper, “Solar-Driven Electrochemical Synthesis of Ammonia using Nitrate with 11% Solar-to-Fuel Efficiency at Ambient Conditions.”

To identify the catalyst, the researchers first applied computational theory to predict which metal would work best. After identifying cobalt through these models, the team experimented with the metal, trying different ways to optimize its activity in the reaction. The researchers found that a rough cobalt surface derived from oxidation worked best to create a reaction that was selective, meaning it converted nearly all the nitrate molecules to ammonia.

“Finding an active, selective, and stable catalyst that worked in a solar-powered system is powerful proof that sustainable synthesis of ammonia at an industrial scale is possible,” Singh said.

Not only is the reaction itself carbon-neutral, which is good for the environment, but if the system is developed for industrial use, it may also have an almost net-negative, restorative effect on the environment.

“Using wastewater nitrate means we also have to remove the contaminant from surface and groundwater. Over time, this means the process may simultaneously help correct for industrial waste and runoff water and rebalance the nitrogen cycle, particularly in rural areas which may experience economic disadvantages or bear the greatest risk from high exposure to excess nitrate,” Singh said.

High exposure to nitrate through drinking water has been associated with health conditions like cancer, thyroid disease, preterm birth, and low birth weight.

“We are all very thrilled with this achievement, and we are not stopping here. We are hopeful that we will soon have a larger prototype with which we can test a much greater scale,” said Singh, who is already collaborating with municipal corporations, wastewater treatment centers, and others in the industry on further developing the system.

A patent for the new process has been filed by the UIC Office of Technology Management.