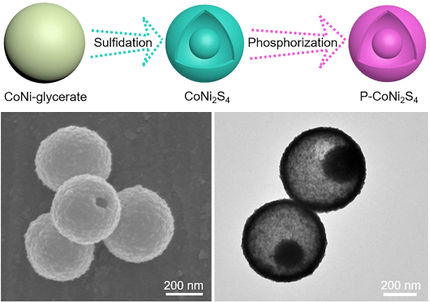 Electrolytic hydrogen production powered by renewable energy is seen as an environmentally friendly means to ameliorate global climate and energy problems. In the journal Angewandte Chemie, a research team has now introduced a novel and inexpensive material for electrodes that may provide for highly efficient, energy-saving hydrogen production: porous, phosphorized CoNi2S4 yolk-shell nanospheres.

Both half reactions of water electrolysis—hydrogen and oxygen evolution—are unfortunately slow and require a lot of power. Catalytically effective electrodes, particularly those based on precious metals, can accelerate the electrochemical processes and improve their energy efficiency. However, their large-scale use is impeded by high costs, limited abundance, and low stability. Alternatives based on abundant, inexpensive metals usually do not work satisfactorily for both half reactions.

A team led by Shuyan Gao (Henan Normal University, China) and Xiong Wen (David) Lou (Nanyang Technological University, Singapore) has now developed a novel, inexpensive, multifunctional electrode material based on cobalt (Co) and nickel (Ni) for efficient electrocatalytic hydrogen production. To make the material, nanospheres made of cobalt–nickel–glycerate are subjected to combined hydrothermal sulfidation and gas-phase phosphorization. This forms objects called yolk-shell nanoparticles made of phosphorus-doped cobalt–nickel–sulfide (P-CoNi2S4). These are tiny spheres with a compact core and a porous shell with a space in between—much like an egg whose yolk is surrounded by the egg white and so does not touch the shell.

Phosphorus doping increases the proportion of Ni3+ relative to Ni2+ in the hollow particles and allows for faster charge transfer, causing the electrocatalytic reactions to run faster. The material can be used as either an anode or a cathode, and demonstrates high activity and stability in the production of hydrogen and oxygen in the electrolysis of water.

To reduce the overall voltage of the electrolysis cell, hybrid electrolysis concepts are also being researched. For example, instead of being coupled to the production of oxygen, hydrogen production could be coupled to the oxidation of urea, which requires significantly less energy. Sources of urea could include waste streams from industrial syntheses as well as sanitary sewage. The new nanoparticles are also very useful for this half reaction.

Both water and urea electrolysis require comparatively low cell voltage (1.544 V or 1.402 V, respectively, at 10 mA cm–2 over 100 hours). This makes the new bimetallic yolk-shell particles superior to most known nickel–sulfide- and even precious-metal-based electrocatalysts. They present a promising approach for electrochemical hydrogen production, as well as for the treatment of urea-containing wastewater.