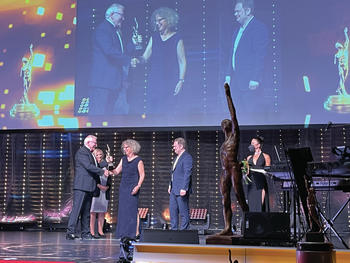 Managing Director Alexandra Knauer is pleased to accept the award

The Berlin-based manufacturer of laboratory instruments for analysis and purification KNAUER Wissenschaftliche Geräte GmbH was awarded the "Großer Preis des Mittelstandes 2021" of the Oskar Patzelt Foundation on Saturday, September 18, 2021 for the Berlin/Brandenburg region. Alexandra Knauer and Carsten Losch (Management) and Katharina Pohl (Head of Human Resources) were delighted to accept the prize at the Maritim Hotel in Würzburg, Germany

The award-winning companies convinced the jury and successfully prevailed against 4,674 competitors nominated in the six 2021 competing regions. The evaluation was based on business figures as well as 50 other business-related questions in five categories. Petra Tröger, Chairman of the Oskar Patzelt Foundation, emphasized: "In this competition, the focus is on the holistic evaluation of a company, its overall business results, and its sustainability and future orientation, not just for the company but for society."

The awards gala as part of the competition was held for the 27th time. The motto this year was "Jetzt erst recht" meaning something like "Now more than ever" in English. It stands for the cohesion of our society, because: "German SMEs are a pillar of stability and trust" and the award-winning companies were doing outstanding things for the society. These companies look after people and stabilize local regions and economic cycles on a daily basis.

No other business competition in Germany achieves such a large and sustained response as the competition organized by the Leipzig-based Oskar Patzelt Foundation does since 1994. The prize is not endowed. For the companies, it is solely about honor and confirmation of their achievements, without financial incentives.

Managing Director Carsten Losch reported on the gala evening: "We were very excited, because before the awards ceremony no one knows who will be allowed to go on stage and receive an award. What a joy when we were called up! That was a great evening for us and a high appreciation for the work of all our employees!"

Due to the Corona pandemic, the KNAUER company was able to establish an additional business field besides its main field of activity, liquid chromatography. To combat the pandemic, several companies were intensively researching novel mRNA vaccines. It was not clear whether they would ever actually be approved. However, production of the vaccines should be ready for the day of approval. Starting in the summer of 2020, KNAUER developed systems for the production of so-called lipid nanoparticles for the manufacturing process of a pharmaceutical company. In these devices, the sensitive mRNA is encapsulated so that it can be inoculated and the vaccine can develop its effect.

According to the jury, KNAUER's customers appreciate the quality of the products, which are traditionally developed and produced at the company's headquarters in Berlin. "Made in Germany" is the magic formula that is linked to very high added value. Other foundations of the success are the passion of the employees for their job and the high expertise of each individual. In addition to the core competencies, the management attaches great importance to sustainability and inspires a large part of the workforce with this. With a lot of heart and commitment, an active contribution is made against problems such as global warming, loss of biodiversity, waste of resources and mountains of waste as part of a long-term strategy and vision for more sustainability.

For the future, KNAUER is strategically focusing on short-, medium- and long-term subjects such as the continuous advancement of its equipment portfolio, the improvement of existing construction and small parts, and the strengthening of its core competencies.

As part of its corporate responsibility, KNAUER has also been socially engaged for years. In addition to regularly placing orders with workshops for the disabled in the region and holding an annual Social Day to support social projects, the company maintains the "KNAUER Entdecker Klub" laboratory for schoolchildren. There, school classes can conduct basic experiments in chemistry and physics under supervision at experiment stations and learn about scientific correlations. At the beginning of the Corona pandemic, KNAUER produced disinfectants in its own facilities and distributed them free of charge to local kindergartens and schools. KNAUER responded to the flood disaster in Germany this summer with a fundraising campaign organized at short notice, in which employees donated a freely selectable amount of their gross wages and the company management more than doubled the total amount donated.