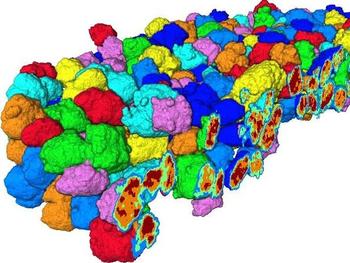 434 Particles were imaged simultaneously with a resolution of 74 nm and identified and characterized individually with respect to their geometrical properties and fragmentation behaviour. The displayed rendering shows a virtual cut through the tomographic data set where each identified particle is color-coded for better visualization. Most particles are about 5-6 microns in diameter. The data has further been segmented into regions of similar electron density, to separate polymer from catalyst fragments within each particle; these regions are displayed in blue, green, orange, and red and visualized via the virtual cut though the 3-D representation of the catalyst particles. This segmentation allowed for a detailed analysis of the fragmentation behaviour of each particle.

An X-ray study at DESY is pointing the way towards a better understanding of plastics production. A team led by Utrecht University investigated so-called Ziegler-type catalysts, the workhorses in the world's polyethylene and polypropylene production, at DESY's X-ray source PETRA III. As the scientists report in the journal JACS Au, the catalyst microparticles fragment into an astonishing variety of smaller particles during polymer production. The results allow for a better finetuning of desired polymer properties and may even help to further increase polymer yield.

Polyolefins, such as polyethylene (PE) and polypropylene (PP), play an important role in everyday life. Applications range from food packaging to increase the lifetime of the product to the sterile packing of medical equipment to the insulation of electrical cables. To prepare tailored polyolefins on demand, a versatile class of catalyst materials, such as the Ziegler-type catalysts, are used that consist of very small particles containing various metals such as titanium.

The catalyst particles have typical sizes of only a few tens of micrometres (thousandths of a millimetre), that is, less than the thickness of a human hair. Thanks to these catalysts, polyethylene can be produced at ambient pressure and temperature, and with enhanced material characteristics. “Polyolefin research today focusses on specifically tailoring polymer properties to the demands of customers, and this is where insights about the polymerisation process such as the ones obtained in this study are crucial,” explains Koen Bossers from Utrecht University, first author of the study.

Typically, with one gram of titanium, more than 100 kilograms of polyethylene can be produced today. This is already a very high efficiency, but since the world production of polyethylene and polypropylene with Ziegler-type catalysts is many million tons per year, and the catalyst initially remains in the product, any increase in efficiency is also still desirable. “One important requisite for a smooth and efficient olefin polymerisation process is that these catalyst particles successively fragment into even finer pieces while the polyolefin is formed within,” explains Florian Meirer from Utrecht University who led the research together with Bert Weckhuysen, head of the inorganic chemistry and catalysis group at Utrecht. “This fragmentation is essential for efficient polymer production as it frees up additional surface area on the catalyst particles during the process and thus extends polymer production.”

In a collaboration with DESY and the industrial polyolefin companies SABIC and DSM the team studied such Ziegler-type catalyst materials after ethylene polymerisation at beamline P06 of DESY's X-ray source PETRA III. “Thanks to the high 3-D spatial resolution of 74 nanometres obtained over a comparatively large volume of 120x120x20 micrometres, we could image more than 434 ethylene polymerised catalyst particles and successfully reconstruct them,” reports co-author Jan Garrevoet from DESY.

This powerful instrumental approach provided unprecedented insights into the overall fragmentation behaviour of this industrially important catalyst material on a statistically significant basis and revealed a large heterogeneity in the degree of fragmentation between the catalyst particles. “These spatial heterogeneities hint towards differences in the accessibility of the catalytically active sites for ethylene, highlighting the importance of optimising polymerisation conditions to ensure a smooth and homogeneous ethylene polymerisation and catalyst fragmentation profile,” explains Weckhuysen. The obtained insights provide a better understanding of the overall industrial process and can help in further optimising process conditions to achieve more efficient tailored polyolefin production.