Detecting microplastics in the environment

Geochemist has developed a method to track microplastics in water, soil and even organisms 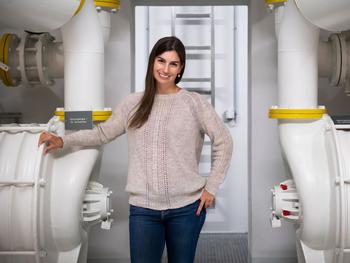 The chemist Denise Mitrano from ETH Zurich is awarded the Marie Heim-Vögtlin Prize 2021.

Geochemist Denise Mitrano has found a way to track how micro- and nanoplastic particles spread through the environment. For this work, she is receiving this year's Marie Heim-Vögtlin Prize from the Swiss National Science Foundation.

Man-made plastic pollutes the environment. When broken down into micro- and nanoparticles, it poses an increasing problem not only for the oceans and their inhabitants, but also for lakes, rivers and soils. For a long time, it was barely possible to track these particles, which are as small as a few millionths of a millimetre in size. Denise Mitrano, a geochemist at ETH Zurich, has now succeeded in doing this: she has developed a method to track micro- and nanoplastics in water, soil and even organisms. For this achievement, she has been awarded this year's Marie Heim-Vögtlin Prize by the Swiss National Science Foundation (SNSF). The ceremony will take place at the event "Building hope for the future – Celebrating progress in sustainability" in Zurich on 14 December 2021.

Denise Mitrano is the 13th winner of the prize. She sees the award as valuable recognition of her work to date and as motivation to continue in the same vein: "I know from my own experience how inspiring female role models can be, so I'm now all the more happy to become a role model myself. For women to have equal opportunities in the sciences is important to me personally." It is also a key concern of the SNSF, which awards the MHV Prize, worth 25,000 francs, annually to an outstanding young woman researcher.

Plastic on the move - in water, soil and plants

Originally, Mitrano was not interested in plastics but in engineered metal nanoparticles, such as those found in textiles and cosmetics, as well as how natural metal nanoparticles behave in the environment. Her breakthrough idea was to transfer the methods used to measure such nano-metals to plastic particles. To this end, she developed a process for chemically adding metals to plastic particles. The advantage of this is that metals can be measured with much more sensitive methods than plastics – and also much faster. (*1). This work was financed by an Ambizione grant as part of the SNSF's efforts to promote young researchers.

In a replica of a small-scale sewage treatment plant, the chemist investigated what happens to plastic particles there (*2). She was able to show that this sewage treatment plant removes over 95 per cent of the micro- and nanoplastics from the water, accumulating them in the sewage sludge. "But that doesn't solve the problem of plastic pollution entirely," Mitrano explains. The reason: in many countries, sewage sludge is used as fertiliser for agricultural soils, which means that the plastic particles end up back in the environment.

In further experiments, the US-born scientist investigated what happens to microplastics in soils and plants. Among other things, she discovered that the particles are taken up by plants and trigger a stress reaction in them.

Mitrano is also involved at the interface of science and policy. She recently published an assessment of new definitions and regulations on microplastics from the European Chemicals Agency ECHA (*3). "The more we know about the pathways of plastic particles and their harmful effects, the better we can prevent plastic from entering the environment in the future," Mitrano believes.