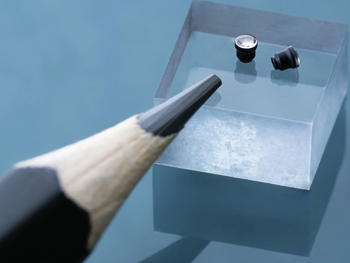 With the new UpOpto material, highly transparent objects can be printed in outstanding quality.

Highly precise 3D-structures in black can now be printed using a 2 Photon-Polymerization (2PP) 3D-printing process. This seemed for a long time impossible as non-transmissive (black) materials greatly reduce the polymerization efficiency of the printing process. Now the 2PP-specialist UpNano GmbH (Vienna, Austria) succeeded in developing such material benefiting from the exceptional high laser power of its NanoOne printer range. The aptly named material UpBlack can be easily combined with the recently developed optical translucent material UpOpto– making the 2PP-3D-printing of entire optical systems (lenses and holders) with one printing system possible.

It sounds like a contradiction in terms: photopolymerization of a non-transmissive material. But that it can be done has now been demonstrated by UpNano. The “secret” to the company’s success is the NanoOne’s laser power of up to 1 Watt, which is several times more than in comparable systems. Despite the high light absorption of UpBlack this laser is strong enough to deliver sufficient energy for polymerization of the liquid photopolymer material during manufacturing and for polymerization to happen.

UpBlack is ideally suited for printing of optical systems. They often require non-transmissive holding structures for lenses or other translucent optical parts. These can now be printed at high resolution with UpNano’s NanoOne 3D-printing systems. “Complementary, we also have an optical transparent material in our commercially available material range”, adds Bernhard Küenburg, CEO of UpNano. “Called UpOpto, this material benefits from exhibiting very low fluorescence, which often interferes with many optical, biological and medical applications.” In fact, UpOpto shows a high biocompatibility and its non-cytotoxicity has been certified according to EN ISO 10993-5:2009, which is important for customers working with microfluidics. “Using UpBlack and UpOpto in combination”, emphasizes Bernhard Küenburg, “our customers can print an entire optical system with just one printer.” Already several customers of UpNano, including a large Asian technology conglomerate, took advantage of this innovation.

But the high laser power of the NanoOne printers is not the only characteristic that distinguishes them from comparable systems. They also use an optimized optical pathway, a patented adaptive resolution technology and smart algorithms for laser scanning. Taken together this allows high-resolution 3D-printing across twelve orders of magnitude – within times never achieved previously.