Nickelates are a new promising material for future superconductivity technologies: Scientists have now succeeded in explaining their electronic structure. 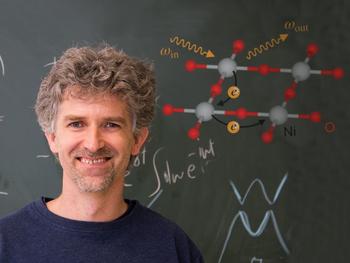 Jan Kuneš. On the right: Nickel and oxygen atoms, and moving electrons in between

Even after more than 30 years of research, high-temperature superconductivity is still one of the great unsolved mysteries of materials physics. The exact mechanism that causes certain materials to still conduct electric current without any resistance even at relatively high temperatures is still not fully understood.

Two years ago, a new class of promising superconductors was discovered: so-called layered nickelates. For the first time, a research team at TU Wien has now succeeded in determining important parameters of these novel superconductors by comparing theory and experiment. This means that for the first time a theoretical model is now available that can be used to understand the electronic mechanisms of high-temperature superconductivity in these materials.

In search of high-temperature superconductors

Finding a material that still remains superconducting at significantly higher temperatures would be a revolutionary discovery that would open the door to many new technologies. For a long time, the so-called cuprates were considered particularly exciting candidates – a class of materials containing copper atoms. Now, however, another class of materials could turn out to be even more promising: Nickelates, which have a similar structure to cuprates, but with nickel instead of copper.

"There has been a lot of research on cuprates, and it has been possible to dramatically increase the critical temperature up to which the material remains superconducting. If similar progress can be made with the newly discovered nickelates, it would be a huge step forward," says Prof. Jan Kuneš from the Institute of Solid State Physics at TU Wien.

Theoretical models describing the behaviour of such superconductors already exist. The problem, however, is that in order to use these models, one must know certain material parameters that are difficult to determine. "The charge transfer energy plays a key role," explains Jan Kuneš. "This value tells us how much energy you have to add to the system to transfer an electron from a nickel atom to an oxygen atom."

Unfortunately, this value cannot be measured directly, and theoretical calculations are extremely complicated and imprecise. Therefore, Atsushi Hariki, a member of Jan Kuneš’ research group, developed a method to determine this parameter indirectly: When the material is examined with X-rays, the results also depend on the charge transfer energy. "We calculated details of the X-ray spectrum that are particularly sensitive to this parameter and compared our results with measurements of different X-ray spectroscopy methods," explains Jan Kuneš. "In this way, we can determine the appropriate value – and this value can now be inserted into the computational models used to describe the superconductivity of the material."

Important prerequisite for the search for better nickelates

Thus, for the first time, it has now been possible to explain the electronic structure of the material precisely and to set up a parameterised theoretical model for describing superconductivity in nickelates. "With this, we can now get to the bottom of the question of how the mechanics of the effect can be explained at the electronic level," says Jan Kuneš. "Which orbitals play a decisive role? Which parameters matter in detail? That's what you need to know if you want to find out how to improve this material further, so that one day you might be able to produce new nickelates whose superconductivity persists up to even significantly higher temperatures."