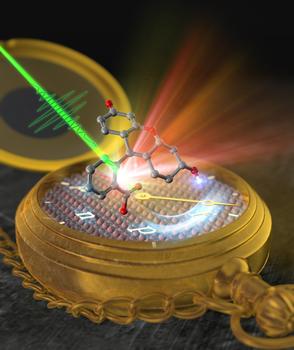 When the titania and the dye adsorbed on its surface are irradiated with a femtosecond pulsed laser proton transfer from the dye molecules to the titania surface, the fluorescence of the deprotonated dye is observed.

A temporal change in the titania surface chemical state during the UV light irradiation is not observable through conventional methods such as regular FTIR or Raman spectroscopy. Therefore, a team led by Professor Hiromasa Nishikiori of Shinshu University's RISM observed this reaction through time-resolved fluorescence spectroscopy. The team noted the monoanion transformation to the dianion (deprotonated species) of fluorescein “in the excited states” where the proton transfers from the fluorescein dye to the titania surface during the UV irradiation, which was not previously established by transient absorption spectroscopy.

Fluorescein, an organic dye sensitive to light and acidity/basicity was adsorbed on the surface of the titania as a probe molecule. The group used a time-resolved surface plasmon resonance (SPR) spectroscopy with a femtosecond pulsed laser. By using femtosecond pulsed laser SPR spectroscopy, the group was able to indirectly observe the proton transfer process from the dye to the titania surface and proved the formation of basic hydroxyl groups.

Observation through the UV irradiation time showed that the surface became more basic with OH groups on the surface of the titania which accepts the protons from the fluorescein monoanion. Time-resolved fluorescence probe observation using organic dyes that are sensitive to light and acidity/basicity is a very effective method for observing small light-induced behaviors (proton transfer processes) that occur on solid surfaces in a very short time.

The researchers were successful in observing the dianion and monoanion ratio of the fluorescein through the establishment of the SPR spectroscopy method. Professor Nishikiori hopes to continue to contribute to advances in hydrogen production with photocatalytic water splitting with the establishment of this simple method that enables researchers to observe and evaluate the activity of the photocatalysis.