Chemists develop a method for producing cement by milling instead of burning lime, which is harmful to the environment 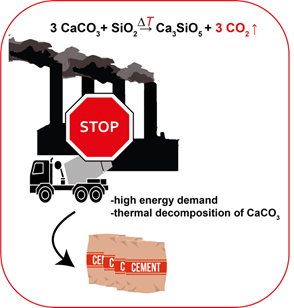 Conventional production of cement by burning lime (CaCO₃) and sand (SiO₂): during the reaction carbon dioxide (CO₂) is released. 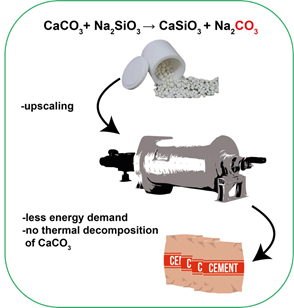 Global warming and affordable housing are two dominant topics of public debate. Climate protection is achieved by reducing emissions of the greenhouse gas carbon dioxide (CO₂). Housing is generated through more housing being built. This requires concrete, the most important building material in our modern world. At first glance, concrete appears to be unproblematic. It does not contain any fossil fuels, it is non-toxic, and it does not float in the oceans in the form of plastic waste. But this impression is misleading, because cement production is currently the largest industrial emitter of CO₂ emissions worldwide, accounting for about 8 percent or 2.7 billion tons of CO₂ per year. This is due to the combustion of fossil fuels – mostly coal – at temperatures of around 1,000 degrees Celsius and sintering at around 1,450 degrees Celsius.

Concrete is very versatile, inexpensive, literally hard, and can be cast into almost any shape. It consists, in principle, only of sand, gravel, water, and the binder cement. The latter is made by the calcination of lime, clay, and some other components, and forms stable calcium silicate hydrates during hardening, which are responsible for the properties of concrete.

However, the problem lies precisely in the calcination of lime (CaCO₃), because for every molecule of calcium oxide (CaO) produced, the so-called "burnt lime" or "quicklime", one molecule of the greenhouse gas CO₂ is released. For an annual world production of around 4.5 billion tons of cement, this is translated into 2.7 billion tons of CO₂. This is equivalent to about half the annual CO₂ emissions of all transport. China is responsible for about 50 percent, Germany for about 1.5 percent of the emissions from cement production.

Chemists at Johannes Gutenberg University Mainz (JGU) in Germany have now developed a method that could drastically reduce CO₂ emissions from cement production in the long run. In this process, the raw lime (CaCO₃) is no longer converted into burnt lime in coal-fired kilns but is simply milled with solid sodium silicate (Na₂SiO₃). This milling step produces an "activated" intermediate that contains the constituents of the cement in uniform distribution. When reacted with sodium hydroxide solution, a product is formed that is structurally similar to the calcium silicate hydrates. The formation of the cement paste and the setting with water proceed via a complex reaction cascade, the elementary steps of which have been analytically elucidated using high-tech methods.

While the calcination of the lime requires temperatures of 1,000 to 1,500 degrees Celsius, the milling step is carried out at room temperature. At 120 kilowatt hours per ton, the mechanical energy input for grinding conventional cement is only about 10 percent of the energy used for the calcination process. However, this is only equivalent to the energy saved – and the associated CO₂ emissions – by burning fossil fuels in cement production. More importantly, bypassing lime calcination could ideally avoid CO₂ emissions in the gigaton range. Since grinding is a standard process in the cement industry, it would be conceivable to implement the process from laboratory to industrial scale.

The Mainz-based chemists emphasize that the cost and energy estimates are only rough approximations and that laboratory tests cannot be compared to an industrial process, where development, design, feasibility, maintenance, and various other parameters must be considered. A lot of development work is needed for this. "This may be a first step for a non-conventional way of cement production, but it is not yet a fully developed solution," emphasized co-author Marcel Maslyk.

Professor Wolfgang Tremel and Dr. Ute Kolb of Mainz University share this view: "The process is potentially suitable for producing cement for large-scale processes," said the two group leaders at the JGU Department of Chemistry. "However, carrying it out on a technical scale would take many years and thus would not provide a short- or medium-term remedy for CO₂ emissions."