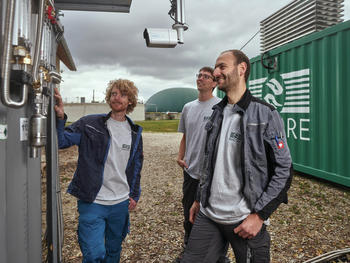 (from left) Maximilian Hauck, Felix Fischer and Jeremias Weinrich at the prototype unit in Erding.

Biogas is an important factor in the implementation of the energy transition. But there is room for improvement in the efficiency of these facilities. Researchers at the Technical University of Munich (TUM) have developed a plant concept that combines greater power output with a smaller carbon footprint. With this, the team also impressed at the “XPRIZE Carbon Removal Student Competition”, which is supported by the foundation of the entrepreneur Elon Musk. The young researchers and doctoral candidates won a grant of up to 250,000 US dollars to implement their concept.

Biogas facilities convert organic material into power and heat. Manure, plant waste or purpose-grown energy crops such as maize and grain are initially broken down by microorganisms. The resulting mixture of methane and carbon dioxide is known as biogas.

Methane is the main component of natural gas. It is also contained in the biogas used as fuel in the engines of conventional electric power stations. “However, instead of being converted into electricity, a considerable share of the energy turns into heat,” says Dr. Stephan Herrmann, head of the Electrochemical Energy Conversion Group at the Chair of Energy Systems at TUM.

Fuel cells instead of engines

A possible alternative to engines are high-temperature fuel cells. These use electrochemical processes to turn biogas into electric power and achieve higher efficiency. “However, commercially available solutions do not use the full potential of the fuel cells,” says Herrmann. They produce fuel residues that are burned. “A large portion of the chemical energy of the biogas is lost through this exhaust combustion.”

In the BioCORE project, funded by the German Ministry of Education and Research, Herrmann and his colleagues have developed an alternative plant concept with high-temperature fuel cells. The young researchers have already implemented a prototype of the patented technology in a container and demonstrated the feasibility of the system.

“We installed a closed circuit in our system,” says Herrmann. “That means that we have no losses of combustible gas and use nearly 100% of the methane. The exhaust is pure carbon dioxide, which is stored and can then be reused.” The heat created in the fuel cells can also be converted into electric power with a steam turbine. “This will produce an unprecedented electrical output efficiency of 80 percent in future systems.”

What makes the system special: the high-temperature fuel cells have a second operating mode in which electrical current is used to combine the carbon dioxide with steam to turn it back into methane. This permits the reuse of the carbon dioxide created in the normal operating mode. The methane could be fed into a natural gas network and stored for months without significant losses.

The researchers have since tested their system on the Garching campus, where they used natural gas. Now they have relocated their container to Erding and have put the prototype unit into operation at a local biogas plant.

Prof. Hartmut Spliethoff, the head of the Energy Systems chair, believes in the concept. “This is an entirely new, user-oriented system design,” he says. “Nobody had ever thought of combining these components so that the biogas plant could operate as a closed circuit. The control systems in particular required a lot of expertise and experimentation.”

The researchers also enjoy international success: The project won an “XPRIZE Carbon Removal Student Competition” award of up to 250,000 US dollars. This challenge is part of the XPRIZE Carbon Removal competition, which the Musk Foundation is supporting. The goal is to develop technologies for removing carbon dioxide from the earth's atmosphere.