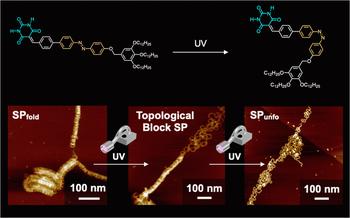 Polymers, the basis of all plastics, usually do not have an ordered structure, in contrast to biopolymers such as proteins. A team of researchers has now developed a polymer that can be differentiated into folded (ordered) and unfolded (disordered) domains using UV irradiation. The team’s work offers new possibilities for developing functional soft materials, as they write in the journal Angewandte Chemie.

Proteins consist of long molecular chains that can fold or twist about themselves, or form an unordered cluster. The arrangement of differently ordered domains within the protein give it its ultimate form, and therefore function. However, what occurs simply and ubiquitously in nature is not always so easy to reproduce in a lab. It is difficult to give chain-like macromolecules, such as polymers, any form other than an unordered cluster.

For a particular class of polymers known as supramolecular polymers, an international team of researchers led by Shiki Yagai, Chiba University, Japan, and Giovanni M. Pavan, Politecnico di Torino, Italy, have now discovered a differentiated folding system. In supramolecular polymers, the monomers in the chain are not linked by direct chemical bonds. Instead, they are held together by non-bonding interactions such as electrostatic forces, giving researchers an interesting tool to manipulate the structure of the polymer after its formation.

The research team built the supramolecular polymer from monomers that formed six-membered rosettes stacked on top of one another to give an infinitely long chain—a supramolecular polymer chain. An intrinsic curvature generated along the stacked rosettes caused the nanofibers to twist up and fold into a helical structure. The folding could be removed by triggering a “light switch”. UV-light irradiation caused the monomer to bend, forming a kink in the molecule, reducing the rotation of the rosette, and unfolding the helical structure.

To prevent the entire polymer from unfolding uniformly, the researchers also employed a second switch which works using temperature. A slightly more rigid monomer made it possible to retain the curvature of the polymer chain. Heating then gave rise to a state in which the polymer reacted to the UV irradiation by unfolding in a non-uniform, cooperative way.

One block after the other unfolded, and the researchers reported that, upon prolonged irradiation and keeping the polymer warm, the helical blocks became shorter until the entire structure was reduced to an unordered cluster. This unfolding mechanism was confirmed by molecular simulations. The authors suggest that the results obtained from computer modeling illustrate how isomerization occurring in more or less ordered domains in the assemblies can be at the origin for the separation of a supramolecular polymer into folded and unfolded regions.

The study confirmed the separation of a supramolecular polymer into folded and unfolded regions. Such blocks could be given further functions or interact differently with their environment. The authors say that this may open up new possibilities for nanofabrication of functional soft materials.