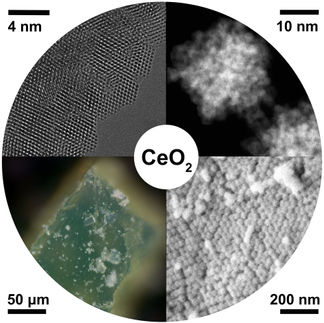 Using targeted gamma radiation, researchers at the Max Planck Institute of Colloids and Interfaces have revealed the appearance and the specific role of non-crystalline phases during the formation of mesocrystals – crystals consisting of aligned nanoparticles. Their findings provide fundamental insights for the controlled development and design of new mesocrystalline.

Wouldn't it be practical if the bricks of a house assembled all by themselves? This has been happening in nature for millions of years in the form of mesocrystals. These fascinating materials combine nanostructural features with the appearance of large crystals because their nanometer-sized particles self-organize into single-crystalline order. Evolutionary optimized structures with outstanding mechanical properties have been created according to this principle, such as mother-of-pearl, eggshells, sea urchin spines and the hard tissue of our bones. Designing synthetic mesocrystals for different applications requires a detailed understanding of the mechanisms underlying their formation. However, this is complicated because mesocrystals range in size from a few nanometers in the early stages to their final size, which can be visible to the naked eye. “Usually, chemical additives are used to help align the nanoparticles. However, they obscure the initial growth stages of the mesocrystals”, says Dr. Nadja Tarakina, group leader at the Max Planck Institute of Colloids and Interfaces (MPICI).

Researchers from the Max Planck Institute and the KTH Royal Institute of Technology (Sweden) have now synthesized mesocrystals by exposing cerium salt dissolved in water to gamma radiation. “This simple set-up helped us to control the growth more precisely and to minimize the use of chemicals, making observations of the initial stages of the process possible” says Diana Piankova, first author of the study and a doctoral researcher at the MPICI. The researchers found that amorphous phases (which has no crystalline order) form in the early stages of mesocrystal growth and only then nucleation of primary particles takes place inside this non-crystalline matrix. They also showed that the matrix provides the confinement within which particles align with respect to each other, forming mesocrystals. In analogy to the construction of a house, these amorphous phases play the role of the cement that connects the aligned bricks in the walls. However, in the case of mesocrystals, the amorphous matrix is also the supplier of the ions that enable the growth of the particles (house bricks) themselves. These crystals constructed from nanoparticles can continue to self-assemble even further after drying and form supracrystals that are visible to the naked eye. Just as an architect may design not a single house but a whole neighborhood so that the houses are oriented in a certain way to serve the specific needs of their inhabitants, this multi-level hierarchical architecture of supracrystals is a fascinating concept for future materials design.