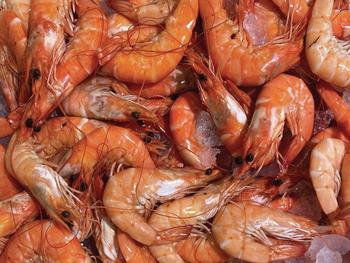 Thin-film composite membranes are widely used in applications such as wastewater treatment, gas separation and chemicals production. They include a porous support topped by an ultrathin layer containing nanoscale pores that can trap molecules and tiny particles while allowing liquid solvents to pass through.

Most of these membranes are made using materials derived from fossil fuels, some of which are toxic. So a research team led by Gyorgy Szekely set out to re-engineer these membranes using green materials and processes.

The team made the porous support using recycled plastic and coated this with a natural nontoxic polymer called chitosan, derived from shrimp shells. The National Aquaculture Group (Naqua) in Saudi Arabia produces about 50,000 tonnes of shrimp shell waste annually, which is used to produce 135 tonnes of chitosan per year.

To form chitosan into a nanoporous membrane, the team cross-linked its polymer chains using 2,5-furandicarboxaldehyde (FDA), a molecule derived from plant waste via green processes. The researchers selected eucalyptol, produced from the leaves of the eucalyptus tree, as the solvent for this reaction. They also used a catalyst called TMG, a greener alternative to the harsh compounds typically used to speed up the cross-linking.

“Converting abundantly available waste biomass into value-added materials, such as this membrane, not only solves a waste-management issue but also generates a value-added product,” says Szekely. Using waste materials also means the new membrane has a similar cost to conventional membranes, he adds.

After optimizing the membrane preparation process, the researchers tested the membranes using a solvent called acetone that carried polystyrene molecules of different lengths, along with a smaller molecule called methyl styrene dimer.

The membrane allowed acetone to flow through at a similar rate to conventional membranes. “It can also filter out molecules of an equivalent size to dyes or active pharmaceutical ingredients,” says Cong Yang, a Ph.D. student in the team. “Therefore, this membrane is practically applicable for biomedical, textile, pharmaceutical or food industries.”

The researchers also showed they could fine-tune the membrane’s properties with a nontoxic solvent called TamiSolve. They now hope to collaborate with local shrimp farms to ensure a sustainable supply of chitosan, as well as develop processes to make the membranes on a larger scale.