Femtosecond micro-supercapacitors on a single leaf could easily be applied to wearable electronics, smart houses, and IoTs 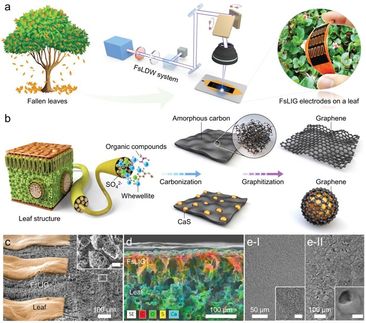 The schematic illustration of the production of femtosecond laser-induced graphene.

A KAIST research team has developed a graphene-inorganic-hybrid micro-supercapacitor made of leaves using femtosecond direct laser writing lithography. The advancement of wearable electronic devices is synonymous with innovations in flexible energy storage devices. Of the various energy storage devices, micro-supercapacitors have drawn a great deal of interest for their high electrical power density, long lifetimes, and short charging times.

However, there has been an increase in waste battery generation with the increases in the consumption and use of electronic equipment as well as the short replacement period that follows advancements in mobile devices. The safety and environmental issues involved in the collection, recycling, and processing of such waste batteries are creating a number of challenges.

Forests cover about 30 percent of the Earth’s surface, producing a huge amount of fallen leaves. This naturally occurring biomass comes in large quantities and is both biodegradable and reusable, which makes it an attractive, eco-friendly material. However, if the leaves are left neglected instead of being used efficiently, they can contribute to fires or water pollution.

To solve both problems at once, a research team led by Professor Young-Jin Kim from the Department of Mechanical Engineering and Dr. Hana Yoon from the Korea Institute of Energy Research developed a one-step technology that can create porous 3D graphene micro-electrodes with high electrical conductivity without additional treatment in atmospheric conditions by irradiating femtosecond laser pulses on the surface of the leaves without additional materials. Taking this strategy further, the team also suggested a method for producing flexible micro-supercapacitors.

They showed that this technique could quickly and easily produce porous graphene-inorganic-hybrid electrodes at a low price, and validated their performance by using the graphene micro-supercapacitors to power an LED and an electronic watch that could function as a thermometer, hygrometer, and timer. These results open up the possibility of the mass production of flexible and green graphene-based electronic devices.