CSIC researchers have discovered that the digestion of microplastics can decrease the amount of beneficial bacteria present in the colon. 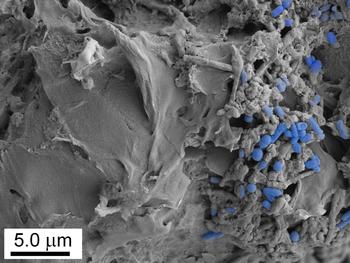 Microscopic image of microplastics colonized by the intestinal microbiota.

A group of researchers from the CSIC has discovered that the ingestion of microplastics reduces the bacterial diversity of the microbiota of the colon, in addition to producing an alteration of the balance in the microorganisms present. The study, published in Scientific Reports, has shown that after the ingestion of PET microplastics (associated with the food chain) the abundance of bacteria known for their positive effects on health decreases and the presence of other microbial groups related to pathogenic activity increases. "Given the possible chronic exposure to these particles through our diet, the results obtained suggest that their continued intake could alter the intestinal balance and, therefore, health," says Victoria Moreno, a researcher at the Food Science Research Institute (CIAL) of the CSIC.

The study, which also involved the Institute of Catalysis and Petrochemistry (ICP) and the Institute of Ceramics and Glass (ICV) of the CSIC, takes on great relevance as the first to assess the impact of microplastic ingestion in the digestive tract and human intestinal microbiota. "It is necessary to know the fate in the body of these materials present in our daily lives and the consequences in the short, medium and long term", defends Moreno. The latest estimates indicate that, on average, each person could ingest between 0.1 and 5 grams of microplastics each week through food and beverages.

In addition, the study has shown for the first time that these microplastics can undergo biotransformations along the gastrointestinal tract and reach the colon with a form structurally different from the original. "All these observed mechanisms and factors, which are just beginning to be studied, will contribute to finding out whether microplastics can remain in the human body and potentially accumulate in some organs and tissues," the researcher concludes.

To develop this research, the CSIC interdisciplinary team has designed a protocol to simulate the ingestion and digestion of microplastics under physiological conditions, which can be extrapolated to the study of other types of plastic and particle sizes. "Using CSIC's patented in vitro model of gastrointestinal digestion, simgi®, we were able to host the human colonic microbiota during the microplastic intervention," explains Victoria Moreno. This protocol, combined with the use of electron microscopy and spectroscopy, has made it possible to monitor changes in the structure and morphology of microplastics in the digestive tract.

The work has been developed within the framework of the Susplast platform and the European project on the study of the effects of micro and nanoplastics on human health, PlasticsFatE.