Portable and inexpensive stochastic lasers with applications in microscopy

This is the first time such lasers have been obtained using electrical power, according to a study published in 'Nature Photonics' 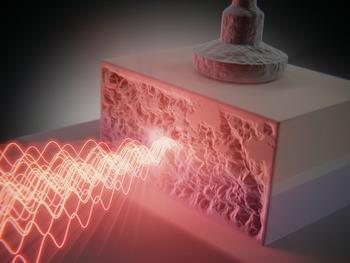 Artistic recreation of a stochastic laser.

Research led by the Spanish National Research Council (CSIC) has succeeded in developing a new technique for the fabrication of stochastic lasers using electrical power, as described in Nature Photonics.

Conventional lasers are characterized by emitting a coherent beam of light, in a direction with precise frequency and phase. In contrast, the emission of a stochastic laser is incoherent; it occurs intermittently, in the form of pulses containing beams in different directions and with different frequencies and phases.

The CSIC researcher at the Institute of Materials Sciences of Madrid (ICMM), responsible for the research, Cefe López, explains that "the breakthrough consists in the first realization of electrically powered stochastic lasers". Thus, the use of this type of lasers is made cheaper and easier. "It can be carried in a briefcase because it can even be connected to a battery to operate, or attached to a microscope.

Conventional lasers, because of their coherence, create a grainy or speckle effect, which is not suitable for microscope imaging. When illuminating objects with them, interference effects are produced that cause areas of light accumulation and areas of darkness that cause this effect. "However, a stochastic laser by its nature has a broader spectrum. The consequence is that it does not produce speckle and is more appropriate for microscopy illumination," says the CSIC researcher.

Until now, to obtain stochastic lasers, another pump laser was needed, which made it difficult to transport due to its large size and weight, as well as requiring high economic investments. With this new technique it is possible to modify a conventional laser that can operate with any power source. The process consists of treating the conventional laser with an ablation technique, modifying the roughness of one of the laser mirrors by means of a high-energy pulsed laser.