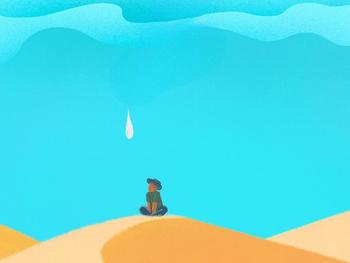 Hydrogels have an astonishing ability to swell and take on water. In daily life, they are used in dressings, nappies, and more to lock moisture away. A team of researchers has now found another use: quickly extracting large amounts of freshwater from air using a specially developed hydrogel containing a hygroscopic salt. The study, published in the journal Angewandte Chemie, shows that the salt enhances the moisture uptake of the gel, making it suitable for water harvesting in dry regions.

Hydrogels can absorb and store many times their weight in water. In so doing, the underlying polymer swells considerably by incorporating water. However, to date, use of this property to produce freshwater from atmospheric water has not been feasible, since collecting moisture from the air is still too slow and inefficient.

On the other hand, moisture absorption could be enhanced by adding hygroscopic salts that can rapidly remove large amounts of moisture from the air. However, hygroscopic salts and hydrogels are usually not compatible, as a large amount of salt influences the swelling capability of the hydrogel and thus degrades its properties. In addition, the salt ions are not tightly coordinated within the gel and are easily washed away.

The materials scientist Guihua Yu and his team at the University of Texas at Austin, USA, have now overcome these issues by developing a particularly “salt-friendly” hydrogel. As their study shows, this gel gains the ability to absorb and retain water when combined with a hygroscopic salt. Using their hydrogel, the team were able to extract almost six liters of pure water per kilo of material in 24 hours, from air with 30% relative humidity.

The basis for the new hydrogel was a polymer constructed from zwitterionic molecules. Polyzwitterions carry both positive and negative charged functional groups, which helped the polymer to become more responsive to the salt in this case. Initially, the molecular strands in the polymer were tightly intermingled, but when the researchers added the lithium chloride salt, the strands relaxed and a porous, spongy hydrogel was formed. This hydrogel loaded with the hygroscopic salt was able to incorporate water molecules quickly and easily.

In fact, water incorporation was so quick and easy that the team were able to set up a cyclical system for continuous water separation. They left the hydrogel for an hour each time to absorb atmospheric moisture, then dried the gel in a condenser to collect the condensed water. They repeated this procedure multiple times without it resulting in any substantial loss of the amount of water absorbed, condensed, or collected.

Yu and the team say that the as-prepared hydrogel “should be optimal for efficient moisture harvesting for the potential daily water yield”. They add that polyzwitterionic hydrogels could play a fundamental role in the future for recovering atmospheric water in arid, drought-stricken regions.