Built to take the heat 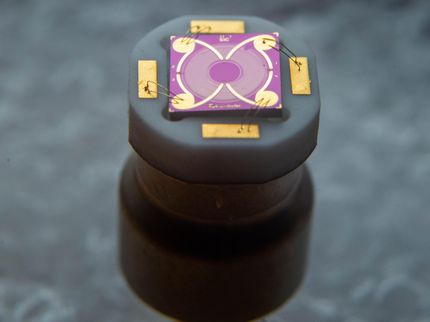 EA special etching process is used to create sensors that work at up to 600°C.

While conventional sensors reach breaking point at around 300°C, researchers at Fraunhofer IZM are creating a sensor that works reliably at twice that temperature. The secret of the heat-loving sensors: Silicon carbide, etched with exceptional precision. Their ability to monitor pressure even in extremely adverse environments could help fine-tune the combustion process in jet turbines and reduce the fuel consumption of aircraft.

Humans have dreamt of flying since our species first looked up to the sky. From the story of doomed Icarus to the design genius of Leonardo da Vinci, myth and imagination were slowly enriched with scientific and technical knowhow. Latest since the arrival of jet engines in the mid-20th century, humanity has taken to the skies in ever larger and ever more powerful flying machines. The working principle of the jet engine seems simple on the surface: An extremely powerful exhaust jet from the gas turbine engine generates thrust that propels the aircraft forward. But the picture becomes more complex when one looks under the hood. The compression of the air inside the engine creates enormous pressure, and the combustion chamber reaches temperatures of up to 600° centigrade, or more in the even more extreme conditions of rocket engines. To guarantee safety and be able to monitor these conditions in use, sensors need to fulfil tough requirements: They not only have to be sensitive and precise enough, but also absolutely reliable and durable in extremely adverse and corrosive environments.

In the north of Germany’s capital Berlin, researchers at Fraunhofer IZM have taken on the mission to design and build a high-temperature sensor with the right properties. Silicon carbide or SiC, their material of choice, represents a quantum leap for the robustness of pressure sensors. Conventional silicon sensors would not be an option for this type of application, as they would reach their limit already at 150°C. With the Silicon-on-Insulator (SoI) technology, this limit can be pushed to around 400°C. But when this threshold is crossed and the sensors are exposed to mechanical pressure, they begin to deform and immediately lose precision.

Using SiC for the new generation of high-temperature sensors comes with many evident advantages: The material is extremely robust, chemically virtually inert, and stable even at high temperatures. It can cope with a vast temperature range, reaching up to 600°C. Its mechanical and chemical properties led to it being recognized as a possible gamechanger for microelectronics years ago. But the positive properties come at a price: “Silicon carbide is a blessing and a curse. The unique strength and durability of the material make it very promising for electronic components, but the same properties make processing SiC a real headache”, Piotr Mackowiak, researcher at Fraunhofer IZM, knows.

The team gathered around Mackowiak has now found a solution to this conundrum. The challenge for them was to create a semiconductor manufacturing process to build a tiny, but stable base body on a thin membrane. They did so with an extremely fast double etching process that etches the silicon carbide at four micrometres per minute. This is eight times the conventional speed, and it makes the technology interesting for the high throughput rates in industrial production. The sensor created by Mackowiak’s team also has an unusual shape that keeps the design stable at high temperatures without any need for external cooling.

“Our thinking was to keep the design to the essential basics, to ensure that it is heat resistant, but also so thin that it can bend and work as a piezometer – and we did both with deep etching”, Mackowiak explains. Current sensors in this field work by piezoelectric measurements, which can record dynamic, but not static pressure, and they cannot withstand the very high temperatures they are exposed to for too long. “Our sensors use the piezoresistive effect, which means that they can track both dynamic and static pressure, and that over long periods at even higher temperatures.” The sensor and the package are now available to future project partners, who could also get involved in adapting the sensors for other environmental parameters.

Sensors that work reliably at high temperatures of up to 600°C could make air travel easier on the environment. By monitoring the thermo-acoustic pressure oscillations and other process parameters right in the jet turbine, the system allows far better control over the process: The fuel-to-air ratio could be fine-tuned for more efficient and cleaner combustion. In the end, this would reduce the amount of jet fuel needed to fly.
Small changes to the design can alter what the sensors measure, which would make the new sensors an interesting choice not just for air travel and spaceflight, but potentially also for electric cars or deep drilling.